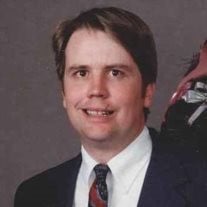 Jeffrey Mark Crews, 50, would have been 51 on February 1, 2014. Mark passed away on Wednesday, January 15, 2014 at his residence. Mark is survived by his wife of twenty-six years, Donna K. Crews of Humboldt, TN; his beloved children, Jeffrey M. Crews of Meridian, MS and Jennifer M. Crews of Jackson, TN; his parents Jimmy and Jannette Crews of Jackson, TN; his brother Mike and wife Lisa Crews of Medina, TN; his mother-in-law and father-in-law, Doug and Mary Thompson of Jackson, TN and several special nieces and nephews and one special aunt, Annette Cummings of Jackson, TN. Mark was a native of Jackson and has lived here most of his life. He graduated from Memphis State University in 1985 with a degree in Marketing and he has followed that vocation throughout the years, selling everything from name plates for equipment, pharmaceuticals and insurance around the southern states. He later joined the family’s local truck tire business, where he was a salesman and later became the Vice-President and General Manager of the Company. Mark was a member of Englewood Baptist Church. He was a member in the Elks Lodge # 192, where he was a past exalted ruler and currently served as a trustee. One of their projects is supplying Christmas baskets for the community’s needy. Mark always had an open heart and hand for the sick and less fortunate. SERVICES: A funeral service will be held at 10:00 AM Saturday, January 18, 2014 in the chapel of Arrington Funeral Directors with Dr. Philip Jett officiating. Burial will follow in Highland Memorial Gardens. The family will receive friends on Friday, January 17, 2014 from 5:00 PM until 7:00 PM at Arrington Funeral Directors. Pallbearers will be Vern Plank, Chris Copeland, David Barnes, Sammy Crews, Billy Shults and Jimmy Hysmith. Honorary pallbearers will be John Cooper, Tim Belton and John Newman. The family is requesting in lieu of flowers donations in memory of Mark be directed to Englewood Baptist Church, 2267 N. Highland Ave. Jackson, TN 38305 or to Elks Lodge # 192, 28 Executive Drive, Jackson, TN 38305. Arrington Funeral Directors, 148 W. University Parkway, 668-1111 www.arringtonfuneralgroup.com

Jeffrey Mark Crews, 50, would have been 51 on February 1, 2014. Mark passed away on Wednesday, January 15, 2014 at his residence. Mark is survived by his wife of twenty-six years, Donna K. Crews of Humboldt, TN; his beloved children, Jeffrey... View Obituary & Service Information

The family of Jeffrey Mark Crews created this Life Tributes page to make it easy to share your memories.