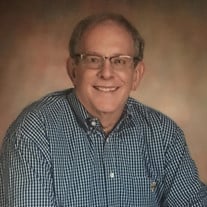 Our hearts are full but broken because of the passing of our husband, father, Grampy, and friend. After a hard battle with pancreatic cancer, Jay G. Osborn III passed on September 25, 2018. Dr. Joseph Thornton will be officiating the ceremony at Arrington Funeral Directors on Thursday, September 27, 2018 at 11am. Burial will follow at Ridgecrest Cemetery. Jay was born on November 10, 1954 in South Bend, Indiana. He loved Notre Dame football and followed the games even after his family moved to Tennessee. Jay graduated from Lambuth University with his bachelor's degree and got his master's degree from Union University. He was a member of the Tennessee Society of Certified Public Accountants for many years. Jay was owner of Osborn Consulting until the time of his passing. He was a member of Lester's Chapel United Methodist Church where he served on the Finance committee. He also served on the Board of Pensions for the United Methodist Church. He was an avid blood donor and gave 23 gallons over the course of his adult life. Jay was proceeded in death by his father Jay G. Osborn, Jr. and mothers Delores LaFortune and Carol Ackerman. He is survived by his loving wife of 43 years, Karen Crocker Osborn and two beloved daughters, Kimberly (Brent) Green of Lakeland, Tennessee and Jenny (Sheldon) Hoesli of Cashion, Oklahoma. Jay is survived by a sister, Susan (Eddy) Adams of Arlington, Texas, a brother Todd (Iris) Osborn of Davie, Florida, and sister in law Kaye Cash of Jackson, Tennessee. He was known as Grampy to five grandchildren: Max William Hoesli, Crocker Allen Hoesli, and Eli Osborn Hoesli of Cashion; Ryne Lain Green and Avery Elise Green of Lakeland. Many nieces and nephews were also affected by the impact of this great man. In lieu of flowers, he asked that donations be made to St. Jude Children's Hospital. Jay never met a stranger and was a friend to all. He valued laughter, fun, friends, and others. Jay left an impact and legacy that none can compare. He will be truly and sincerely missed. Pallbearers are James Ellington, Brent Green, Sheldon Hoesli, Carl Johnston, Kevin Monroe, and David Pruitt. Honorary pallbearers are Mel Morgan, Max William Hoesli, and Ryne Lain Green.

Our hearts are full but broken because of the passing of our husband, father, Grampy, and friend. After a hard battle with pancreatic cancer, Jay G. Osborn III passed on September 25, 2018. Dr. Joseph Thornton will be officiating the ceremony... View Obituary & Service Information

The family of Jay G. Osborn III created this Life Tributes page to make it easy to share your memories.

Our hearts are full but broken because of the passing of our...