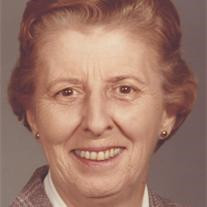 Jane Baynes Hoppers passed away Thursday, December 9, 2010 at home after a brief illness. She was 88. A native of Ripley, Tennessee, she was the daughter of William Henderson Baynes Jr. and Minnie Lee Brodie Baynes, and was born and raised in the old colonial home built by her great-grandfather shortly after the Civil War. She was educated in the Ripley schools and was later a graduate of Whitworth College in Brookhaven, Mississippi and the University of Tennessee at Knoxville. At Whitworth she was editor of the college newspaper and at graduation received the cup given annually to the Outstanding Student. At UTK she was a member of the Kappa Delta sorority, the Phi Kappa Phi honor society, and at graduation was given the Pi Lambda Theta award. Prior to her marriage she taught at Byars Hall High School in Covington. She was married in 1944 to James William Hoppers who preceded her in death in 2008. After living in San Diego, Corinth, and Union City, they moved to Jackson in 1948. She was a member of Northside United Methodist Church. Earlier she was a member of Forest Heights United Methodist church for nearly fifty years. During her long life she had many friends and activities but she will be remembered mainly for her devotion to her family, past and present. In addition to her husband she was preceded in death by a sister, Mary Louise Mills of Columbus, Ohio, two brothers, Col. William H. Baynes of Sherman Oaks, California, and Brodie Baynes of Knoxville. She is survived by her son, James William Hoppers Jr. and his wife Melanie, and her grandchildren, Jimmy, Brian and Sarrah, Katie, Patrick, and Sara, by Jimmy and Brian?s mother Ruth Lowry Hoppers, and by a sister-in-law Betty Hoppers Arnold of Fayetteville, Tennessee. Funeral services will be held on Sunday, December 12, 2010 at 3:00 PM at Northside United Methodist Church with Dr. Don Thrasher officiating. Burial will follow in Ridgecrest Cemetery. The family will be receiving friends on Sunday from 1:00 PM until 3:00 PM at the church prior to the service.

Jane Baynes Hoppers passed away Thursday, December 9, 2010 at home after a brief illness. She was 88. A native of Ripley, Tennessee, she was the daughter of William Henderson Baynes Jr. and Minnie Lee Brodie Baynes, and was born and raised... View Obituary & Service Information

The family of Jane Hoppers created this Life Tributes page to make it easy to share your memories.