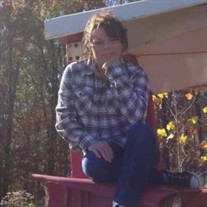 Jamie Lynn Smith, age 44, of Luray, TN, transitioned to her heavenly home on Friday, December 10, 2021. Jamie Lynn Raines was born to Terrell Marshall Raines and Sherry Lynn (Knight) Raines on Wednesday, January 5, 1977, at Milan Hospital in Milan, Tennessee. The granddaughter of Marshall Woodson Raines & Mabel (Leeh) Holt on her paternal side and James Thomas Knight & Becky (Butler) Knight on her maternal side. She resided in Jackson, TN until her family moved to Huntsville, AL in 1986, where she lived the next 26 years of her life making friendships of a lifetime. She always had physical disabilities and therefore struggled in school being forced to quit at 16 years old. She then self-studied and earned her GED in 1995. She loved to cook, so she found restaurants & convenient store delis more fulfilling than just a paycheck. Her favorite things in life were her family, friends and her animals. She never claimed to be a perfect Christian but tried her best to love as Jesus would want her to. She also enjoyed photography, camping, scrapbooking, music and Alabama football. Her wish was cremation so she can be taken back to her property where she found the most peace on earth. Other than her beloved mother, Sherry (Knight) Raines, Jamie is preceded in death by her grandparents; son,Thomas Beau Smith; granddaughter, Lacey Kay and step-brother, William Tinker. She is survived by her husband John Thomas Smith, Jr.; her bonus daughter, Kayla Darlene Smith; two granddaughters, La’Mya Faith and Braidyn Deloris-Reigns; father and stepmother Terrell and Sandra Raines and step-brothers, Robert Phillips and Dwayne Phillips as well as a host of friends, near and far, who mourn her passing. A Celebration of Life will be held on Wednesday, December 15, 2021, at 1:00 p.m. at Arrington Funeral Directors with Rev. Chuck Maxwell officiating. The family will receive friends from 12:00 p.m. until the service time. In addition to flowers she requested donations be made in her honor to the American Heart Association, Lupus Foundation, RIFA (Regional Inter-Faith Association) or Redemption Road Rescue.

The family of Jamie Lynn Smith created this Life Tributes page to make it easy to share your memories.