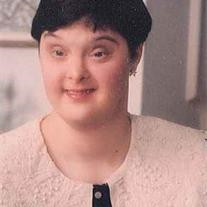 Funeral services for Jamie Lytton, 52, will be held Tuesday, February 22, 2011 at 11:00AM at the First Presbyterian Church in Humboldt, TN, with Dr. Jacqueline DeBerry officiating. Burial will follow in Rose Hill Cemetery.Jamie died Friday, February 18, 2011 at Humboldt Health and Rehab Center.She was born August 21, 1958 in Humboldt, TN, the daughter of James and Betty Cate Lytton. Jamie graduated from Humboldt High School in 1977 and trained at the Tennessee Rehabilitation Center in Smyrna, TN, majoring in food service and received daily living and technology training and support from the STAR Center in Jackson, TN. She worked for several years in food service at McDonald?s in Humboldt, employed by Jeff Gamble. Jamie lived independently in Humboldt until her move to the Baddour Center in Senatobia, MS. During her five years in this community she worked under contract for FedEx and participated in play productions and musicals. She received numerous achievement awards. Jamie was a member of First Presbyterian Church in Humboldt.Jamie met life on her own terms and pushed the boundaries of other people?s expectations. She treasured her relationships with family and friends but loved meeting new people and trying new things. She had a love for music, dance, performance and popular culture.. Her story of success is one that will be remembered by all who knew her.Jamie is survived by her mother, Betty Lytton of Humboldt, TN, two sisters Elizabeth Crandell and her husband Retired Colonel Ed Crandell of Southern Pines, NC, and Dr. Jeannie Luckey and husband Ken of Humboldt, TN. She is also survived by nieces and nephews, Dr. Beth Goodier, Carson Goodier, Grayson Goodier and Paul Seneker. Jamie was preceded in death by her father James Lytton.The family has requested that in lieu of flowers that memorial contributions be directed to the First Presbyterian Church, 1528 Presbyterian Drive, Humboldt, TN 38343.The family will be receiving friends Tuesday one hour prior to the service at the church.

The family of Jamie Lytton created this Life Tributes page to make it easy to share your memories.

Funeral services for Jamie Lytton, 52, will be held Tuesday,...