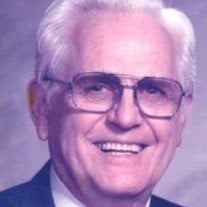 Funeral services for James C. (Pete) Wilson, age 94, will be held Monday, January 27, 2014 at 11:00 a.m. at West Jackson Baptist Church, Jackson, TN. The service will be officiated by Rev. Lonnie Sanders and Rev. Ricky Clark with burial to follow at Highland Memorial Gardens. Mr. Wilson died Friday, January 24, 2014 at Maplewood Health Care Center in Jackson, TN. He was born April 11, 1919 in Obadiah, MS, the son of Frederick Ulysses Wilson and Evie Pratt Wilson. He served in the United States Army during World War II in the 558th Field Artillery in the European Theater of Operations. Mr. Wilson was a faithful member of West Jackson Baptist Church for over 70 years. He served the church in numerous ways, including being the Director of the Sunday School, a long time finance committee member and a life deacon. He was the founder of Machine Tool and Supply Corporation and a member of The Union University Board of Trustees. He is preceded in death by his wife of over 74 years, Walterine Temple Wilson. He is survived by two sons, Larry (Debbie) Wilson of Knoxville, TN; Dennis (Dianne) Wilson of Auburn, AL; one daughter, Ramona (Mark) Yates of Jackson, TN, and an “exchange student son”, Ole Briseid (Elisabeth) of Oslo, Norway who has maintained a special relationship with the family for over 50 years. He is survived by five grandchildren; Trent (Mallory) Wilson, Drew (Allison) Yates, Ben Wilson, Claire (Phillip) Mitchell and Sarah (Austin) Stephenson. He is also survived by 4 great-grandchildren: Miller Wilson, Tucker Wilson, Mallie Wilson and Sophie Yates. He is preceded in death by three sisters, Hazel Harvey, Hilda Powell and Mora Wilson and two brothers, Bill Wilson and Burnsie Wilson. He was much loved as a husband, father, grandfather and great-grandfather. He demonstrated to his children and others how to live a life of integrity and service, both in his business and personal dealings. He was a man of conviction; he was loyal to his family, friends and church, and he lived out these traits daily. He was deeply involved in his childrens' and grandchildrens' lives, following their sporting and musical interests. His loving marriage to Walterine for over 74 years was an example and testimony of what a Christian marriage should be. The family is very grateful for his loving influence upon their lives. The family will receive friends Sunday, January 26, 2014 from 4 p.m. to 6 p.m. at Arrington Funeral Home and before the memorial service Monday at West Jackson Baptist Church, Jackson, TN. The Deacons of West Jackson Baptist Church are asked to sit as a body at the memorial service. Any memorial gifts may be sent to West Jackson Baptist Church Building Fund or Union University.

The family of James "Pete" Wilson created this Life Tributes page to make it easy to share your memories.