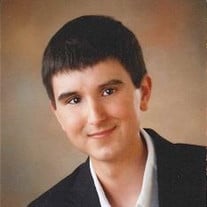 James Forrest Kellar, 20, of Jackson, TN, died October 17, 2014 at home surrounded by his family. He was born July 29, 1994 in Dyersburg, TN, the son of Paul and Holly Kellar. Forrest was a strong-willed and goal-oriented young man. He was an avid reader and coin collector. In his earlier years, he loved performing. In his first live performance, he played a lead role as “Charlie” in The Best Christmas Pageant Ever. In middle school, he excelled as a member of St. Mary’s cross-country team. During high school, he volunteered hundreds of hours at Jackson-Madison County General Hospital. In 2012, Forrest served as honorary co-chair for Madison County’s Relay for Life. Prior to his senior year in high school, he successfully completed Union University’s Rising Senior Program. Forrest graduated from Crockett County High School in 2013, earning many academic distinctions including top ACT scorer in his graduating class. Forrest lived each day of the last four years fighting cancer. Through it all, he was joyful and optimistic. He set goals and achieved many of them. To know him was to love him. He was full of humor, intellect, kindness, thoughtfulness and compassion. His sweet soul touched the lives of so many. In addition to his parents, Forrest is survived by his younger brother Peyton. He leaves his paternal grandparents, James and Clara Kellar of Kissimmee, FL; his maternal grandparents, Danny and Mary Jane Forrest of Manchester, TN; and his great-grandmother, Helen Nichols of Waverly, TN. Forrest is survived by many special aunts, uncles, cousins and friends. Forrest was preceded in death by his great-grandparents Paul and Edith McCammon of Seymour, TN; Mary Kellar of Maryville, TN; and Leo Nichols of Waverly, TN. SERVICES: Visitation beginning with a prayer service will be held 5 to 7 p.m. Sunday, October 19th at Arrington Funeral Directors in Jackson. A funeral mass, officiated by Monsignor Thomas Kirk, will be held at 11 a.m. Monday, October 20th at St. Mary’s Catholic Church in Jackson. The committal service, officiated by Minister Harold Ray, will be at 11 a.m. Tuesday, October 21st at Prospect Baptist Church Cemetery in Walland, TN. In lieu of flowers, memorial donations may be made to St. Jude Children’s Research Hospital, 501 St. Jude Place, Memphis, TN 38105. Arrington Funeral Directors, 148 W. University Parkway 731/ 668-1111 www.arringtonfunerlgroup.com

James Forrest Kellar, 20, of Jackson, TN, died October 17, 2014 at home surrounded by his family. He was born July 29, 1994 in Dyersburg, TN, the son of Paul and Holly Kellar. Forrest was a strong-willed and goal-oriented young man. He... View Obituary & Service Information

The family of James Forrest Kellar created this Life Tributes page to make it easy to share your memories.