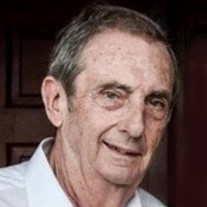 James (Jim) W. Matterson, age 84, died peacefully on Wednesday, September 15, 2021, at his residence surrounded by his family. Jim was born in Skaneateles, NY on December 22, 1936, the son of the late Curtiss D. and Elizabeth L Matterson. Jim and his family moved to Jackson, TN in 1978 to work at the former Rockwell International plant and then took a position at Eaton Corporation in Humboldt, TN as a tool designer, where he retired after many years of service. He was a great family man who was very dependable and graciously helped anyone that needed it. He enjoyed his yard and being a handyman to many. Jim is survived by his wife of fifty years, Nancy E Matterson of Jackson, TN; and his children, Tina M. Young (Dick Trost) of Clinton, NY, Jimmy Matterson of Crocker, MO, Stephen Sessions (Cindy) of Minot, ND, Kathryn Sessions (Kelly) of St. Petersburg, FL, Sandra Selph (Danny) of Jackson, TN, Mark Sessions (Liz) of Beech Bluff, TN and Scott Matterson of Paris, TN; two sisters, Jean Terrell of Tully, NY and Margaret Fredricks of Ridgeway, CO along with numerous grandchildren and great grandchildren. He was preceded in death by his brother Curtiss Matterson, grandson, Jason Matterson, and great-granddaughter, Kelsey Caswell-Young. SERVICES: The family will have a memorial service on Friday, September 24, 2021, at 6:00 PM in the chapel of Arrington Funeral Directors with Dr. Jerry Welch officiating. They will be receiving friends prior to the service from 4:00 PM until 6:00 PM. The family is requesting that in lieu of flowers, that all memorials be directed to the Downtown Dogs Group, PO Box 3043, Jackson, TN 38303 or to the Alzheimer’s Association, PO Box 41428, Nashville, TN 37204 in his name.

The family of James (Jim) W. Matterson created this Life Tributes page to make it easy to share your memories.