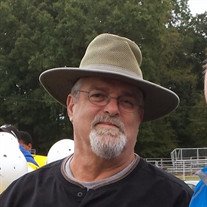 ********SERVICES FOR JAMES THOMAS "J.T." HOWARD HAVE BEEN POSTPONDED UNTIL SATURDAY, MARCH 7, 2015.******* James Thomas “J.T.” Howard, 61, died on March 1, 2015 at the Jackson Madison County General Hospital. J.T. was born in Danville, IL on November 22, 1953, the son of Ruth Webb Howard and the late Thomas Howard. He was retired as a construction superintendent, maintaining a large circle of friends and acquaintances, and made many lifelong friendships. He was a man who had a passion for the outdoors and treasured the many activities that he participated in with his sons and others. A family oriented man, J.T. enjoyed spending time with his wife, children and grandchildren. He is survived by his wife of forty one years and high school sweetheart, Jeannine Holycross Howard; his two sons, James Luke Howard and Ben Howard and wife Teryn all of Jackson, TN; his mother, Ruth Howard Campbell of Danville, IL; two brothers, Benjamin Howard and wife Paula of Inverness, FL and Boon Campbell and wife Tracy of Colorado Springs, CO; a sister, Dawn Campbell of Danville, IL and five grandchildren, James Preston Howard, Ryan Howard, Emma Howard, Corben Howard and Abigail Howard, He was preceded in death by a brother, Jess Stephen “Steve” Howard. SERVICES: A funeral service will be held on Thursday, March 5, 2015 at 2:00 PM in the chapel of Arrington Funeral Directors. Burial will follow in the Pleasant Hill Cemetery in Madison, County. The family will be receiving friends on Thursday, March 5, 2015 from 10:00 AM until 2:00 PM prior to the funeral service. Pallbearers will be Steve Pope, Ralph Morris, Jack VanCamp, Tom McBride, Les Keen, Kevin Howard, Dennis Howard and Shawn Howard. Arrington Funeral Directors, 148 W. University Parkway, 668-1111 www.arringtonfuneralgroup.com

The family of James Thomas "J.T." Howard created this Life Tributes page to make it easy to share your memories.