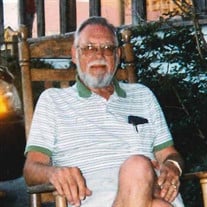 James L. Ellis, age 78, died on Thursday, May 11, 2017 at his Jackson, TN residence surrounded by his loving family. Mr. Ellis was born in McAllen, TX on October 31, 1938, the son of the late Clyde and Velma Thurbush Ellis. He was retired as a Vice-President and Auditor with the former First National Bank of Jackson with thirty-three years of service. He was the original owner and operator of the Ye Ole Pipe Shoppe of Jackson. He was a member of Poplar Heights Baptist Church, where he served as a deacon for over thirty years, sang in the choir and taught Sunday school. He was an avid U.T. Vols fan and enjoyed being in the outdoors, deer hunting or growing tomatoes in his garden. He was a big Elvis fan as well and enjoyed singing his music. He is survived by his wife, Sara Jacqueline Terry Ellis of Jackson, TN; a son, Dr. James L. Ellis and wife Heather of Jackson, TN; two daughters, Cindy Ellis Hailey and husband Danny of Jackson, TN and Marci Ellis Brown and husband Jim of Jackson, TN; a brother Marvin Pete Ellis and wife Tu of Tampa, FL; a sister, Rebecca Louise Scott and husband Paul of Jackson, TN; five grandchildren, Rachel Belew and husband Damon, Jordan Ellis and wife Deanna, Laura Hailey, Kennedy Ellis and Katie Jane Brown and three great grandchildren. He was preceded in death by a son, Brian H. Ellis on May 14, 2012. SERVICES: A private graveside service will be held at 4:00 PM Saturday, May 13, 2017 at Highland Memorial Gardens. The family will be receiving friends from 1:30 PM until 3:30 PM Saturday prior to the service at Arrington Funeral Directors. The family wishes to give a special thanks to Tennessee Quality Home Health/Hospice, Wanda, Linda and Janet with Sitters & More and Dr. Andy Coy with the Jackson Clinic and his nurses Vanessa and Michelle. The family is requesting that memorial contributions be directed to the Alzheimer’s Association or to Poplar Height Baptist Church. Arrington Funeral Directors, 148 W. University Parkway, 668-1111 www.arringtonfuneralgroup.com

James L. Ellis, age 78, died on Thursday, May 11, 2017 at his Jackson, TN residence surrounded by his loving family. Mr. Ellis was born in McAllen, TX on October 31, 1938, the son of the late Clyde and Velma Thurbush Ellis. He was retired as... View Obituary & Service Information

The family of James L. Ellis created this Life Tributes page to make it easy to share your memories.