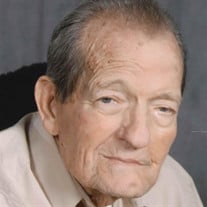 James Parnell Duncan passed away on November 27, 2015 in the beautiful home he built. Jim was born on December 13, 1929 to the late James Otho Duncan and Ellie Ruth Cox Duncan. He was the eighth of eleven children. His early years were spent working for the Memphis Fire Department. From there, he took interest in the automotive industry which led him to earn the title of Master Mechanic. He retired from the Chrysler Corporation as a Service Representative for many years. Not one for sitting idle, he worked at Jackson Christian School for several years as an all-around handyman. He loved helping the school and spending time with the children. He was a Mason and a Shriner. He was a faithful member of Skyline Church of Christ since 1975. He enjoyed music and had his own band for over fifteen years. He loved birds, especially Humming birds and Purple Martins. He always made sure the houses were ready and their feeders were always full. He will be remembered by his family for being Christ-like. He always spoke kind words about everyone and had love in his heart. He is survived by his wife, Floriece Adams Duncan, two daughters, Carolyn Elizabeth Luttrell and Deborah Lyn Rios; two sons, James Michael Duncan and Charles Herman Jenkins III; five grandchildren, Jaime Williams (Josh), Jason Duncan, Jessica Vandagriff (Keith), JorDanna Jenkins and Elacey Massengill (Clark); three great grandchildren, Kristen Feathers, Kent Feathers and Madison Duncan. In addition to his parents, he was preceded in death by seven brothers, three sisters, his son, Donald Ray Duncan, grandchild Suellen Feathers and great grandchild, Levi Massengill. SERVICES: A funeral service will be held at 7:00 PM Monday, November 30, 2015 at Skyline Church of Christ with Jeff Brown, Minister officiating. The family will be receiving friends on Monday from 5:00 PM until 7:00 PM at the church prior to the service time. The committal service will take place on Tuesday, December 1, 2015 in the Blocker Cemetery in Olive Branch, MS. The family has requested that memorial contributions be directed to skyline Church of Christ, 1024 Skyline Drive, Jackson, TN 38301 or to Jackson Christian School, 832 Country Club Lane, Jackson, TN 38305. Arrington Funeral Directors, 148 W. University Parkway, 761/ 668-1111 www.arringtonfuneralgroup.com

James Parnell Duncan passed away on November 27, 2015 in the beautiful home he built. Jim was born on December 13, 1929 to the late James Otho Duncan and Ellie Ruth Cox Duncan. He was the eighth of eleven children. His early years were spent... View Obituary & Service Information

The family of James Parnell Duncan created this Life Tributes page to make it easy to share your memories.