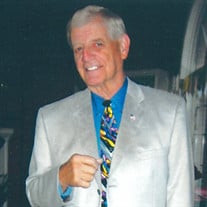 Gene Case was a wonderful, loving, fun-filled man, who loved his family, loved life and loved the Lord. He left this earthly home on October 12, 2018 to join his parents in his eternal heavenly home. Gene was born September 16, 1941, in Jackson, Tennessee, to Nell Stratton Case and James Thomas Case. He graduated from Jackson High School, Class of 1960 and after several years was blessed to join his dad as an employee of the Illinois Central Gulf Railroad as a machinist. Gene was a dedicated employee for 14 years, who never liked to be idle. As a result of his industriousness he earned the Employee of the Year trophy one year, for which he was so proud. His co-workers called him "mean Gene, the load box king". Some even said he earned the Employee of the Year by cleaning and sweeping when his other work was done. After his job ended at the railroad in 1984 he joined the United States Postal Service, where he was a Rural Carrier with the Humboldt Post Office for 20 years, retiring in 2007. He stayed home for 2 months until he decided to find a part time job since he had too much time on his hands. He became an employee of the Jackson Madison County General Hospital as an employee shuttle driver for 9 years, eventually making it a full time position. Gene loved this job and the opportunity to transport the employers around the hospital campus, entertaining them with his jokes and silly sayings, one being, "Get in, sit down, shut up and hold on" and "My job is to get you where you are going and make you smile while I am doing it" and he took that literally! When Mr. Case found himself middle-aged and single again, he decided he needed to get back in church, if he wanted to find a Christian wife. Soon after that, he was reacquainted with an old friend from high school who had moved back to Jackson to be near her family. Her name was Peggy Jones Davis. It was love "at first sight" as they say and they were married a year later on July 3, 1992. They had a wonderful 26 years of love, laughter and friendship, sharing their love of Jesus, family and traveling, leaving Peggy with precious memories of their life together and her love for this very special man. Gene was a member of Hillcrest Baptist Church, Jackson, TN where they both had grown to love the many friends they have made there, as well as their pastor, Dr.Jerry Welch who does not hold anything back as he teaches the truth from the Bible. One of Gene's favorite enjoyments in life was watching the Union University Lady and Men Basketball Teams in action, both at home and on the road. He also followed Southern Gospel Music, especially his most favorite group Greater Vision, as well as being an avid fan of Country Bluegrass star Ricky Skaggs. We can't forget Gene's favorite hangout was the Waffle House where he enjoyed drinking coffee every morning with his buddies. Gene leaves many, many friends to cherish his unique humor and fun-loving ways as well as his loving family: wife Peggy, son Jeff (Tracy) Case grandsons Taylor (Katelyn) Case, Zachary Case (Abby Alexander) Covy Case, Stepdaughter Michelle Hatcher, stepson Michael (Sherry) Hatcher and step granddaughter Grace Murphy, Foster son Eric Kussman, foster grandchildren Cynthia and Christopher Kussman and beloved dog Scooter. All services for Mr. Case will be held at Arrington Funeral Directors, 148 W. University Parkway, Jackson, TN as follows: Visitation, Sunday, October 14, 2018 from 4:00 - 6:00 pm and the Funeral Service, performed by Dr. Jerry Welch, will be Monday, October 15, 2018 at 2:00 pm, with burial to follow at Ridgecrest Cemetery.

Gene Case was a wonderful, loving, fun-filled man, who loved his family, loved life and loved the Lord. He left this earthly home on October 12, 2018 to join his parents in his eternal heavenly home. Gene was born September 16, 1941, in Jackson,... View Obituary & Service Information

The family of James Eugene "Gene" Case created this Life Tributes page to make it easy to share your memories.

Gene Case was a wonderful, loving, fun-filled man, who loved...