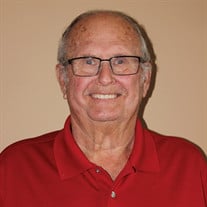 James Avery “Jimmy” Barnes, age 84, passed away on Tuesday, January 26, 2021. A native of Jackson, Jimmy was born on August 24, 1936, the son of the late William Jackson (Jack) and Nola Myrle Barnes. He was a veteran of the United States Army serving in Japan as a member of the Military Police unit. He later continued his service with the TN Army National Guard as a part of the 30th Armored Brigade. Jimmy had a total of 24 years in the service and was a lifelong member of the 30th SAB Association. He was also an active member of the VFW 6496, American Legion Post 12 and of the West Tennessee Veterans Day Committee. He was a one of the founders and served as the secretary for the West Tennessee Veterans Coalition. Jimmy was also a mason in the Masonic Lodge #45 of Jackson. Jimmy was an employee of the United States Postal Service, serving in various positions. His last position was overseeing the Bemis, TN post office. After retirement, he enjoyed working for the Jackson Generals Ballpark for 14 years and working as head of security for the majority of his time at the park. He and his wife were long-time members of West Jackson Baptist Church. They were active in their Legacy Sunday school class. Liked by many, nobody was a stranger to Jimmy. He was a friend to all and loved his family fiercely. He was a true Tennessee Vols football fan, and he will be dearly missed by all who knew him. Jimmy is survived by his wife, Nancy Replogle Barnes of Jackson, TN; two children, Kathy Barnes of Jackson, TN, and Jerry H. Barnes and wife Maichelle of Trenton, TN; three Grandchildren, Spencer R. Barnes and wife Shelly, Beth Smallwood and husband Eric, and Avery Gardner and six great-grandchildren: Parker, Whit and Miller Barnes, Lilly, Hudson, and Colton Smallwood. He was preceded in death by a sister, Peggy Stavlo SERVICES: A graveside service with military honors will be held at 1:30 PM on Monday, February 1, 2021 at Ridgecrest Cemetery, with Rev. Ron Hale officiating. Pallbearers serving will be Robert Jones, Joe Greene Jr., Spencer Barnes, Parker Barnes, Dan Reaves, and Terry Sanders. In lieu of flowers, the family is requesting that memorial donations be directed to West Tennessee Veterans Coalition. P.O box 11342, Jackson, TN 38308. This fund is to support veterans in need. Arrington Funeral Directors, 148 W. University Parkway 668.1111, www.arringtonfuneralgroup.com

The family of James Avery "Jimmy" Barnes created this Life Tributes page to make it easy to share your memories.