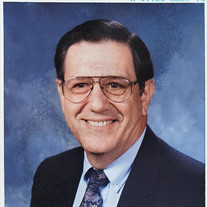 Herman Tipton Baker, 83, died May 26, 2021, at Jackson-Madison County General Hospital. He was born August 6, 1937, in Sevier County, TN, the son of the late Harold and Ruth Rule Baker. He grew up in Sevier County, received his bachelor’s degree from Carson Newman, and his master’s degree from the University of Tennessee. He spent 38 years in the Knoxville and Knox County school systems. He started as a teacher, then served as principal at 5 different schools within the system. Over the course of his career, he was involved in multiple business ventures including his own construction company and holding multiple rental properties both commercial and residential throughout Knoxville. He was a Scout Master and past president of the Knoxville Education Association. He was a Deacon in the Baptist church and served on the Deacon’s board at Central Baptist Church in Fountain City. After retirement, he moved to Jackson, TN, to be closer to family and became active at Grace United Methodist Church serving in various leadership roles. He is survived by his wife of 60 years, Patricia Mynatt Baker, two sons Dr. John Baker and wife Beth of Jackson, TN, Jim Baker and wife Janet of Collierville, TN, sister, Nancy McGowan of Wilmington, NC, grandchildren, Haley Spencer, Evan Baker, Hannah Singer, Olivia Baker, Hillary Baker, Harrison Baker, Sophia Baker, Bailey Whitworth, Cooper Whitworth and great grandchild Evangeline Singer. His niece, Patti Braden had this to say of him: “My Uncle Herman was a teacher, a principal, a math whiz, an entrepreneur, and became a political force in Knoxville due to his leadership, personality, intellect and adventurous spirit. He had a huge heart, loved his family fiercely and helped everyone.” SERVICES: Funeral services will be held Saturday, June 5, 2021, at 2:00PM in the chapel of Arrington Funeral Directors. The family will be receiving friends from 12:00PM until service time at 2:00PM at the funeral home. The family has requested that in lieu of flowers memorial contributions be directed to the American Cancer Society, 2135 Highway 45 By-Pass, Jackson, TN 38305 or Grace United Methodist Church, 142 McClellan Rd, Jackson, TN 38305. Arrington Funeral Directors, 148 W. University Parkway, Jackson, TN 38305 www.arringtonfuneralgroup.com

Herman Tipton Baker, 83, died May 26, 2021, at Jackson-Madison County General Hospital. He was born August 6, 1937, in Sevier County, TN, the son of the late Harold and Ruth Rule Baker. He grew up in Sevier County, received his bachelor&#8217;s... View Obituary & Service Information

The family of Herman Tipton Baker created this Life Tributes page to make it easy to share your memories.