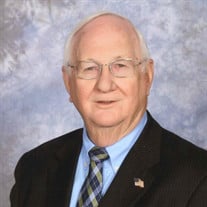 Herbert Cleveland Brock, age 75, died on Saturday, November 26, 2016 at the Jackson Madison County General Hospital. Herbert was born in Crockett County, TN on May 11, 1941 the son of the late Herbert Thomas and Gladys Ethel Lackie. He served in the United States Army. He was a member of North Jackson Baptist Church where he was ordained as a Deacon in 1973 and served as greeter. He was a member of Jackson Masonic Lodge # 45, where he served many positions including Worshipful Master and also member of the Order of the Eastern Star # 85, serving as Worthy Patron numerous times and serving as the Grand Sentinal in 2013. He was employed with Jackson Truck and Tractor in 1967 transitioning to Volunteer International retiring in 2001. He later worked for NAPA after his retirement. He is survived by his wife of 57 years, Mildred Ann Kimbriel Brock of Oakfield, TN; two children, Cindy Wyatt of Jackson and Jennifer Murphy and husband Chris of Nashville, TN; sisters, Geraldine Thompson and husband Gerald of Jackson, Brenda Smith of Nashville and Paula Ramsey and husband Jim of Nashville, TN; grandchildren, Brock Wyatt and wife Donna, Heather Dozier and husband James, Erin Wyatt, Zachary Leyh, Timothy Leyh and wife Kaitlyn, Zach Murphy, Brooke Murphy, great-great grandchildren, Zayden Wyatt and Harper Dozier. SERVICES: A funeral service will be held at 2:00 PM Tuesday, November 29, 2016 at North Jackson Baptist Church with Rev. Opie Dodrill officiating. Burial will follow in the Oakfield Cemetery. Family members will serve as pallbearers. The Deacons are asked to sit together as honorary pallbearers. The family will be receiving friends on Monday, November 28, 2016 from 5:00 PM until 7:00 PM at North Jackson Baptist Church with a masonic service at 7:00 PM. Arrington Funeral Directors, 148 W. University Parkway, 668-1111 www.arringtonfuneralgroup.com

The family of Herbert C. Brock created this Life Tributes page to make it easy to share your memories.