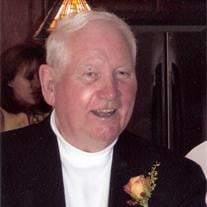 Funeral services for Henry Earl Thompson, 77, will be held at 1:00 PM Sunday, March 28, 2010 in the chapel of McEvoy Funeral Home in Paris, TN with entombment to follow in Hillcrest Cemetery. The family will be receiving friends on Saturday, March 27, 2010 from 4:00 PM until 6:00 PM at Arrington Funeral Directors. Mr. Thompson died on Thursday, March 25, 2010 at his Jackson residence. Arrington Funeral Directors is in charge of local arrangements.Earl was born in Paris, TN on March 3, 1933, the son of the late Otis and Blanche Scarbrough Thompson. In 1962 he co-founded TLM and Associates retiring in 1995. He later established Thompson Development Company retiring from there in 2001. Mr. Thompson received his bachelor?s degree from of the University of Tennessee at Knoxville and a masters degree from the University of Illinois. He was a licensed engineer and surveyor in thirty-two states and was selected to the Who?s who of Civil Structural Engineers. He had served on numerous boards including the Board of Engineering Examiners. He developed and patented a dust collection system for steel mills, as well as developing a manufacturing system for the design and processing of ceramic tile with the Florida Tile Company in Lakeland FL.. He was the lead engineer on the construction of the Liberty Bowl Stadium in Memphis, TN, as well a numerous bridges throughout the area. He was a member of St. John?s Masonic Lodge 332 of Jackson and a Shriner with Al Chymia Temple in Memphis, TN. He was a very avid hunter and fisherman for many years.He is survived by his wife of 57 years, Barbara Vaughn Thompson; two sons, Michael Earl Thompson and wife Carol of Medina, TN and Randy Thompson and wife Patricia of Finger, TN; a daughter, Lisa Thompson Meeson and husband Dana of Three-Way, TN; two brothers, J.W. Thompson of O?Fallon, MO and Ray Thompson of Paris, TN; a sister, Nita Adams of Jackson, TN; eight grandchildren, Amanda Thompson, Hunter Thompson, Brandon Thompson, Hannah Thompson, Haley Thompson, Amber Thompson, Melinda Meeson and Allison Meeson.He was preceded in death by two sisters, Margaret Lewis and Evelyn James.Pallbearers to serve will be Stanley Thompson, Steve Thompson, Bob Thompson, Hunter Thompson, John Etheridge and John Adams.Honorary pallbearers to serve will be H.N. ?Hot? Elkins, Dennis Henderson, David Cisco, Robert Scarbrough, Nat Baxter, Dan Nichols and Glen Holt.

Funeral services for Henry Earl Thompson, 77, will be held at 1:00 PM Sunday, March 28, 2010 in the chapel of McEvoy Funeral Home in Paris, TN with entombment to follow in Hillcrest Cemetery. The family will be receiving friends on Saturday,... View Obituary & Service Information

The family of Henry Thompson created this Life Tributes page to make it easy to share your memories.

Funeral services for Henry Earl Thompson, 77, will be held at...