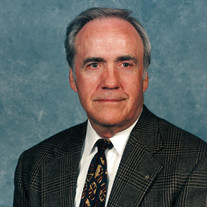 Hayes (Hal) Burleson, 87, passed away on Sunday, October 27, 2019 at the Tennessee State Veterans' Home in Humboldt, TN. Hal was born in Haleyville, AL on March 2nd, 1932, the son of the late Benjamin and Della (Mamaw) Burleson. After graduating from Palm Beach High School, he attended Virginia Tech on a football scholarship where he graduated in 1955. After college, he served honorably as a signalman in the U.S. Navy during the Korean conflict. He then began his civilian career as a finance executive for the Valley Mills Corporation before joining the FBI where he served as a special agent for 25 years. Following his retirement from the FBI, he served as the Chief Investigator for the District Attorney's Office for the State of Oklahoma for another 1O years before ultimately retiring and moving to Jackson, TN. Hal loved playing golf, loved watching his beloved Hokies on TV and was a member of the Skyline Church of Christ where he was an active member for many years of the "Trail Blazers", the senior group at Skyline. Hal was preceded in death by his parents, two of his sisters, Mary and Dorothy, and by his wife of 58 years, Nancy Parrish Burleson. He is survived by two sons, Hal Burleson, Jr. and wife Lori of Panama City, Fl and Dr. David Burleson and wife Cathy of Jackson, TN; his daughter Dr. Jana Harmon and husband Stephen of Roswell, GA; a sister, June Haines Pack of Palm Beach, Fl; seven grandchildren, Ryan Burleson, Jared Burleson and wife Morgan, Catie Burleson Newell and husband Josh, Jeni Burleson Presley and husband Chase, Will Burleson, Ansley Harmon and Jordan Harmon; additionally his legacy includes four great grandchildren - Gunter Hayes Burleson, Rayanne Lee Burleson, William James Presley and Francis David Newell. The family will be receiving friends on Saturday, November 2nd from 10:00 a.m. until 12:00 noon at the Skyline Church of Christ in Jackson, TN. A Celebration of Life service will follow at 12:00 in the same location with Sam Wylie, Elder and Minister, officiating. In lieu of flowers, donations to the Special Missions Fund at Skyline Church of Christ 1024 Skyline Drive, Jackson, TN 38301 or www.skylinechurch.com/church-family/will be appreciated.

Hayes (Hal) Burleson, 87, passed away on Sunday, October 27, 2019 at the Tennessee State Veterans' Home in Humboldt, TN. Hal was born in Haleyville, AL on March 2nd, 1932, the son of the late Benjamin and Della (Mamaw) Burleson. After graduating... View Obituary & Service Information

The family of Hayes (Hal) Burleson created this Life Tributes page to make it easy to share your memories.