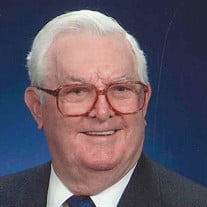 Hayden Haltom, 92, died Thursday, May 29, 2014 at the Tennessee State Veterans Home in Humboldt, Tennessee. He was born April 5, 1922 in Bemis, TN the oldest child of Conrad and Lottie Haltom. He accepted Jesus Christ as his Savior at a young age and lived a dedicated Christian Life. He graduated from J. B. Young High School. He served in the Navy during World War II and the Korean Conflict. He moved to Union City, TN where he met his beloved wife Mary Frances Wright. They married November 7, 1946 and had three children. Hayden served the Lord throughout his life in whatever way he was able. He was a long-time member of West Jackson Baptist Church where he was a life deacon. He and Frances held Sunday morning services at Forest Cove Nursing Home for over 30 years sharing and leading devotionals. He broke his hip 3 years ago and lived in Alexandria Place where he made many new friends. He and his family appreciated the loving care given him there. He was preceded in death by his wife, parents, brothers Jimmy and Ralph and grandson Shawn Haltom. He is survived by one son Larry Haltom of Henderson, KY, two daughters, Brenda Rudd and husband Tim of Carrollton, TX, Debbie Ellis and husband Steve of Jackson, TN, two grandchildren Jennifer Ellis Royal and husband Jamie of Athens, GA, Stephen Ellis, Jr and wife Julianne of Birmingham AL, one great grandson Nolan Duren of Paducah, KY, and one sister Mrs. Hugh (Delores) Blackmon of Jackson, TN. The family has requested that memorial contributions be directed to West Jackson Baptist Church, 580 Oil Well Road, Jackson, TN 38305. SERVICES: Funeral services will be held Saturday, May 31, 2014 at 3:00PM in the sanctuary of West Jackson Baptist Church with Rev. Andy Neely, Rev. Lonnie Sanders and Rev. Ricky Clark officiating The family will receive friends Saturday from 1:30PM until service time at 3:00PM at the church. Mr. Haltom’s Sunday School Class and Deacons are asked to sit as a group and serve as honorary pallbearers. Arrington Funeral Directors, 148 W. University Parkway, Jackson, TN 38305. 731.668.1111 www.arringtonfuneralgroup.com.

Hayden Haltom, 92, died Thursday, May 29, 2014 at the Tennessee State Veterans Home in Humboldt, Tennessee. He was born April 5, 1922 in Bemis, TN the oldest child of Conrad and Lottie Haltom. He accepted Jesus Christ as his Savior at a young... View Obituary & Service Information

The family of Hayden W. Haltom created this Life Tributes page to make it easy to share your memories.