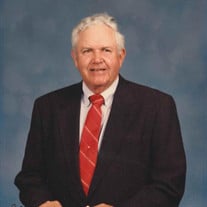 Harold Phillips McLeary, Sr., age 90, died on Saturday, January 28, 2017 at the West Tennessee Veteran Home in Humboldt. Harold was born on October 25, 1926 in Jackson, TN the son of the late R.E. and Virginia Phillips McLeary. He was married to Nancy Jean Stout McLeary who preceded him in death in June 2014. He was a retired, fourth generation farmer and inspector with the State of Tennessee. He served in the United States Army from 1944 thru 1946 with tours in Korea and the Philippines. He was a lifetime member of Browns United Methodist Church. He was a member of the W. TN Emmaus community, the Madison Co. Farm Bureau the Tennessee Farm Bureau, the Madison Farmers’ CO-OP, the American Hereford Association Gideon’s International and was a charter member of the Browns Ruritan. He was a fifty-year member of the Masonic Lodge. He is survived by his daughter, Nancy Ann Stephenson and husband Richard of Jackson, TN; and a son, John Robert “Bob” McLeary of Amelia Island, FL; a brother, Jerry McLeary and wife Agnes of W. Columbia, SC and three grandchildren, Laura Stephenson of Jacksonville, FL, Phillip Stephenson and wife Sarah of Fayetteville, AR and Wesley Stephenson (Peggy) of Trenton, TN. He was preceded in death by an infant sister, Sarah Margaret McLeary and a son, Hal McLeary in 2014 SERVICES: A funeral service will be held on Wednesday, February 1, 2017 at 3:00 PM at Browns United Methodist Church with Rev. Steven Douglas officiating. Burial will follow in Browns Cemetery. Pallbearers will be Jerry Milam, Mike McCallum, David Pearson, Randy Bonner, Gordon Street and Lee Tomlinson. The family will be receiving friends on Wednesday at the church from 1:00 PM until 3:00 PM prior to the service. Memorials can be directed to Browns UMC Youth Programs 181 McLeary Road, Jackson, TN 38305 or to Lakeshore Summer Camp and Retreat Center 1458 Pilot Knob Road, Eva TN 38333. The family wishes to thank the staff at the TN State Veterans Home in Humboldt for their love and care. Arrington Funeral Directors, 148 W. University Parkway 668-1111 www.arringtonfuneralgroup.com

Harold Phillips McLeary, Sr., age 90, died on Saturday, January 28, 2017 at the West Tennessee Veteran Home in Humboldt. Harold was born on October 25, 1926 in Jackson, TN the son of the late R.E. and Virginia Phillips McLeary. He was married... View Obituary & Service Information

The family of Harold Phillips McLeary, Sr. created this Life Tributes page to make it easy to share your memories.