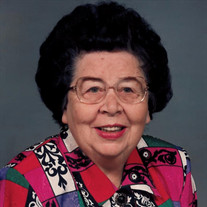 Geneva Burns Rauchle passed away on Wednesday, June 5, 2019, at Northbrooke Healthcare Center where she was surrounded by her family. Born on May 27,1929, in New Albany, MS, she celebrated her 90th birthday last Monday with a party given by her loved ones. For 66 years, Geneva was married to the love of her life, Billy. His death just 2 months ago left a void that could not be filled. He was her best friend, caregiver, travel companion, and so much more. Together, they attended every ballgame, singing event, and supported their children and grandchildren in all their endeavors. The only child of Lloyd and Elsie Gay Burns, Geneva graduated from Jackson High School in 1947. She went on to receive her bachelor's degree from Union University in 1951 where she was a member of Zeta Tau Alpha Sorority. Geneva was a high school teacher in Rutherford and Humboldt, TN. Her years at Humboldt High School were the highlight of her teaching career. Her role as the Senior English and Spanish teacher, as well as Senior Class Sponsor inspired many youth. She loved attending class reunions and remained close to her students. Geneva was notorious for her hospitality, humor, witty sayings, and strong opinion. She loved everyone and never met a stranger. She was known for always offering every guest green Kool-Aide and snacks. During her later years, Geneva enjoyed her time as a member of the Jackson Christian Women's Club, her Canasta club and trips to Branson, Mo. Geneva's knowledge and insight of the Bible made her a strong Christian leader. She was a lifelong member of First Christian Church. During her later years; however, she attended Northside United Methodist Church with family. Her last years in the Pacers Sunday School Class were the highlight of her week. Geneva was preceded in death by her husband, her parents, and her aunt and uncle, Christine and Julian Boyce. She is survived by her daughters Gay (Ronnie) Fowler and Christy (Steve) Little; grandchildren Chris (Katherine) Fowler, Clay (Shelby) Fowler and Clare Little; great grandchildren Liza, Kate and William Fowler, and a special cousin, Julian H. Boyce. SERVICES: Funeral services will be held Sunday, June 9, 2019 at 3:00 pm at Arrington Funeral Directors, with Dr. Don Thrasher officiating. The family will receive friends from 12:30 pm until the time of the service. Burial will follow at Ridgecrest Cemetery. The family would like to thank Tennessee Quality Care and The Star Center Homecare Services for their wonderful love and attention of our mother with special appreciation to Nurse Lisa Riggins and Mary Jones. In lieu of flowers, the family has requested donations be made to Jackson Christian Athletic Fund, 832 Country Club Lane, Jackson, TN 38305 or the charity of the donor's choice. Arrington Funeral Directors, 148 W. University Parkway, Jackson, TN 38305, 731-668-1111, www.arringtonfuneralgroup.com

Geneva Burns Rauchle passed away on Wednesday, June 5, 2019, at Northbrooke Healthcare Center where she was surrounded by her family. Born on May 27,1929, in New Albany, MS, she celebrated her 90th birthday last Monday with a party given... View Obituary & Service Information

The family of Geneva Burns Rauchle created this Life Tributes page to make it easy to share your memories.