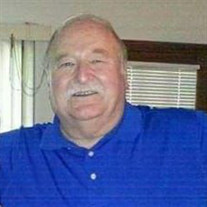 Gary M. Leforgee, age 72, died on Saturday, January 27, 2018 at the Vanderbilt University Medical Center in Nashville, TN. Gary was born in Kansas City, MO on February 8, 1945 the son of the late Marvin and Madonna Hawkins Leforgee. He was active in Boy Scouts during his youth earning his Eagle Scout Award. He was a graduate of Raytown High School in 1963 and married Judy Wiggins Leforgee in July 1965 and was blessed with fifty-two years of love and friendship. He graduated from the University of Missouri with a degree in Forestry in 1968. He was a veteran having served his country as a member of the United States Army from 1968-1971 where he trained in High Tech Communications at Fort Monmouth New Jersey stationed at S.H.A.P.E. – Supreme Headquarters Allied Powers Europe- in Belgium from 1969-1971. Gary was a strong Christian with a Love for his Lord and Savior and cherished his Sunday class members and friends in Tim Fortner’s Class at West Jackson Baptist Church. Singing in the church choir was pure joy for Gary and he has a special place in his heart for fellow choir members and Ricky. He was employed with the City of Jackson as Director of the Grounds Department and then Street Department and really enjoyed all of his co-workers/collogues. He couldn’t resist a good deal at a pawn shop and became good friends with local shop owners. He was also a Hot Rod/Antique car enthusiast and driving his friends and family around in his 1929 Red Hot Rod was a highlight for Gary. He enjoyed traveling, whether it was a cruise or beach vacation with family and friends. His family was his life and he enjoyed watching his children and grandchildren play ball and spending time and especially holidays with his family. He is survived by his wife, Judy Leforgee of Jackson; two daughters, Amy Leforgee McSwain (Frankie) of Counce, TN and Jennifer Leforgee of Jackson, TN; a son, Michael Leforgee (Marie Haley) of Friendship, TN; six grandchildren, Hunter McSwain, Alex McSwain, Katie Grace McSwain, Josh Burks, Reed Leforgee, and Haley Leforgee and a great grandchild, Braxton McSwain; a brothers Bryan Leforgee of Green Valley, AZ and a sister, Diane Holm of St. Louis, MO. SERVICE: A funeral service will be held at 2:00 PM Wednesday, January 31, 2018 at West Jackson Baptist Church, with Tim Fortner officiating. The family will be receiving friends on Wednesday, January 31, 2018 from 12:00 PM until 2:00 PM prior to the service at West Jackson Baptist Church. The family is requesting that memorial donations be directed to the Wounded Warrior Project, PO Box 758516, Topeka, KS 66675 or to Birth Choice 391 Wallace Road, Jackson, TN 38308. Arrington Funeral Directors, 148 W. University Parkway 668-1111 www.arringtonfuneralgroup.com

Gary M. Leforgee, age 72, died on Saturday, January 27, 2018 at the Vanderbilt University Medical Center in Nashville, TN. Gary was born in Kansas City, MO on February 8, 1945 the son of the late Marvin and Madonna Hawkins Leforgee. He was... View Obituary & Service Information

The family of Gary M. Leforgee created this Life Tributes page to make it easy to share your memories.