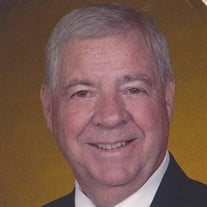 Fred “Sonny” Foster Hawkins passed away on November 2, 2020 in Jackson, TN at the age of 80. Sonny was born on August 24, 1940 in Elizabethtown, KY to Fred and Bernice B. Hawkins. He received his bachelor’s degree from Union University, where he was a record-breaking basketball player and his master’s degree from Memphis State. He was a member of Sigma Alpha Epsilon Fraternity. Sonny was a probation officer with the Department of Correction for the State of TN and worked at Blue Cross Blue Shield for over 30 years as a sales executive and regional manager. He served in the Army Reserve for 6 years. He and his wife are members of Aldersgate United Methodist Church in Jackson, TN. Sonny loved to spend time at the river, playing sports, cheering on the Kentucky Wildcats, traveling, and supporting his granddaughters in all their endeavors. He was known for his giving spirit and he would always say the best job he ever had was being a “Grandad”. Sonny is survived by his wife of 56 years, Kitty Council Hawkins; his brother, Jack Hawkins of Montgomery, TX; his daughter and son-in-law, Kristy and Tony White of Jackson, TN; and his two granddaughters, Chloe and Carly White. A visitation will be held Thursday, November 5, 2020 from 1:00 PM until 3:00 PM with the funeral service following at 3:00 at Arrington Funeral Directors, with Dr. Barry Scott of Aldersgate UMC officiating. Entombment will be at Highland Memorial Gardens Mausoleum following the service. The family is requesting that social distancing be observed and that mask be worn. In lieu of flowers, donations may be made to Aldersgate United Methodist Church Choir Fund, 1050 North Parkway Jackson, TN 38305. Arrington Funeral Directors, 148 W. University Parkway 668.1111 or www.arringtonfuneralgroup.com

The family of Fred "Sonny" Foster Hawkins created this Life Tributes page to make it easy to share your memories.