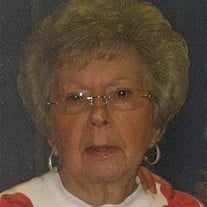 Faye Sanders, age 78, died peacefully on Friday, April 10, 2015 at her daughter’s residence. Faye was born in Decatur, AL, on May 8, 1936, the daughter of the late Elbert and Ollie Whitten Riley. She had lived in Jackson for forty-five years. He was married to H.C. Sanders who preceded her in death on September 24, 1996. She was retired from Jackson Surgical Associates. She was an active member of Englewood Baptist Church since 1970. She taught Sunday school for many years and was a member of the Joy Sunday school Class where she remained active until her health prevented. Faye was an avid bowler and for many years held the highest average for a female bowler. She had won numerous local and national tournaments and had been named The Jackson Sun Bowler of the year for several years. She was also a longtime Braves and Alabama fan. Faye is survived by her children, DeVona Tomlin and husband Hayward and Greg Sanders and wife Robin of Jackson, TN three grandchildren, Paige Edwards, Chip Sanders and Chris Sanders and five great grandchildren, Autumn, Cadie and Madison Sanders and Lee and Riley Edwards. She was preceded by a brother, Joseph Riley and a sister, Elese Landrum. SERVICES: A funeral service will be held at 10:30 AM Monday, April 13, 2015 at Englewood Baptist Church with Dr. Philip Jett and Dr. Brent Lay officiating. Burial will follow in the Bethel Cemetery in Hartselle, AL with a committal service at 4:00 PM. The family will be receiving friends on Sunday, April 12, 2015 from 5:30 PM until 7:30 PM at Arrington Funeral Directors and on Monday, April 13, 2015 from 9:30 AM until 10:30 AM at Englewood Baptist Church. Pallbearers will be Greg Sanders, Chip Sanders, Eddie Edwards, Lee Edwards, Hayward Tomlin and Chris Tomlin. The family is requesting memorial contributions be directed to Englewood Baptist Church, Building Fund, 2267 North Highland Ave., Jackson, TN 38305. Her children feel 2nd Timothy 4:7 describes her best. “I have fought the good fight, I have finished the race, I have kept the faith” Arrington Funeral Directors, 148 W. University Parkway, 668-1111 www.arringtonfuneralgroup.com

Faye Sanders, age 78, died peacefully on Friday, April 10, 2015 at her daughter&#8217;s residence. Faye was born in Decatur, AL, on May 8, 1936, the daughter of the late Elbert and Ollie Whitten Riley. She had lived in Jackson for forty-five... View Obituary & Service Information

The family of Faye Sanders created this Life Tributes page to make it easy to share your memories.