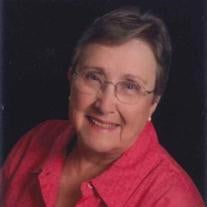 Funeral services for Ellen Daye Henderson, 78, will be held at 10:00 AM Saturday, November 17, 2012 at Forest Heights United Methodist Church with Rev. John Middleton and Rev. Harold Phillips officiating. Burial will follow in Ridgecrest Cemetery. A native of Maury City, TN, she was born on December 30, 1933, the daughter of the late James H. and Katherine Olive Allen Cheshier. Ellen was very musically talented and served as Organist or Pianist at several churches throughout her life including Browns United Methodist, St. Andrew United Methodist and Northside United Methodist in the Jackson area. She also shared her talents with many piano students and church choirs through the years. She had served as the District President of Missionary Society of the United Methodist Church and volunteered with many organizations. She was also known for her delicious wedding cakes for several years. She was a loving and supportive wife and mother to her family. She is survived by her husband Dr. Bob Henderson of Jackson, TN; Dr. Owen Henderson and wife Jeaneice of Jackson, TN; a daughter, Debbie Cravens and husband Dr. Milton of Jackson, TN; a brother, Hugh Cheshier and wife Marlene of Hardyville, SC; a sister Jane Crihfield and husband Mark of Halls, TN; three grandchildren, Bobby Henderson, Will Henderson and Mary Ellen Byrd and husband Josh and one great grandchild, Emma Katherine Byrd. Pallbearers to serve will be Chip Henderson, Matt Henderson, Todd Henderson, Russell Henderson, Corey Crihfield and Cheshier Crihfield. Honorary pallbearers will be Brad Dobbins, Bobby Henderson, Will Henderson and Josh Byrd. The family is requesting that memorial contributions be directed to RIFA of Jackson, 133 Airways Blvd., Jackson, TN 38301. The family will be receiving friends on Friday, November 16, 2012 from 4:00 PM until 7:00 PM at Arrington Funeral Directors and on Saturday, November 17, 2012 from 9:00 AM until services at Forest Heights United Methodist Church. Arrington Funeral Directors 148 W. University Parkway 731/668-1111 www.arringtonfuneralgroup.com

The family of Ellen Daye Henderson created this Life Tributes page to make it easy to share your memories.

Funeral services for Ellen Daye Henderson, 78, will be held at...