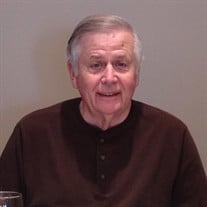 Earl E. Anderson September 9, 1938 – November 23, 2019 Earl Eugene Anderson, age 81, of Jackson, died on Saturday, November 23, 2019 at the Tennessee State Veterans Home surrounded by his loving family. Earl was born in White Township, Pennsylvania, the son of the late Earl Emmanuel Anderson and Margaret Ester Sunday Anderson. He proudly served his country in the United States Navy under President Dwight D. Eisenhower. Stationed in Washington, DC, Earl took the unique assignment of serving on President Eisenhower’s yacht, the Barbara Anne. When he returned home from the Navy, Earl met and married Louise Ritchie of Homer City, Pennsylvania, his bride for the past 58 years. Earl found a career in the computer software field, first at PPG Industries in Pittsburg and West Virginia, which then led him to West Tennessee where he joined the PictSweet Company (originally Winter Garden) as Director of MIS from 1972 until his retirement in 2003. Earl was very active in the Jackson community. He served West Tennessee Healthcare on its Board of Trustees for fourteen years. He played a key role in beginning and developing Jackson’s Sportsplex, and was one the first season ticket holders of the WestTenn DiamondJaxx (now Jackson Generals). For years he was active in church leagues and the Jackson Parks and Recreation community, playing softball, basketball, and representing Jackson as a member of the State Senior Olympics Team. Earl was an avid Pittsburgh Steelers fan and on Sundays often “coached” loudly at the team through the television. He is survived by his wife Louise Anderson and their three daughters, Cheryl Trimpler, Jodi Thompson (Doug), and Lori Boyte (George); grandchildren, Amber Trimpler Thoreson (Carl), Jeff Trimpler, Griffin and Eli Boyte; and great-grandchildren, Ashlyn and Gunnar Thoreson. He is also survived by his two sisters, Cindy Hostetler and Margaret Ann Brookover, both of New Martinsville, West Virginia, and nieces and nephews. A Celebration of Life service will be held at 1:00 PM Wednesday, November 27, 2019 in the chapel of Arrington Funeral Directors, with Dr. Philip Jett officiating. The family will be receiving friends on Tuesday, November 26, 2019 from 5:00 PM until 7:00 PM at Arrington Funeral Directors. Family members will serve as pallbearers. In lieu of flowers, the family asks that Memorial donations be directed to the West Tennessee Healthcare Foundation, 74 Directors Row, Jackson, TN 38305 for Dementia Research Funding or Englewood Baptist Church, 2239 North Highland Avenue, Jackson, Tennessee 38305.

The family of Earl E. Anderson created this Life Tributes page to make it easy to share your memories.