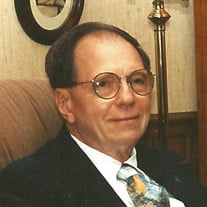 Merrill Shepherd Wise, Jr. O.D., age 90, passed away on January 9, 2019, at Jackson- Madison County General Hospital. Dr. Wise was born on October 25, 1928, in Jackson, TN, the son of the late Merrill Shepherd Wise, Sr. and Laura Grady Wise. After graduation from Jackson High School, he voluntarily enlisted in the U.S. Army at 17 and ½ years of age as the Korean conflict was escalating. He served in the Signal Corps of the United States Army, reaching the rank of sergeant before being honorably discharged. Upon returning home to the United States, he attended Lambuth College, followed by Southern College of Optometry where he graduated with a Doctor of Optometry degree. He married his college sweetheart, Margaret Frances McSwain, of Memphis. The newlyweds moved to Jackson where Dr. Wise opened his optometric practice in 1953. Margaret and Merrill’s marriage lasted 62 years until her death in 2015. Over more than 50 years, Dr. Wise provided vision care for thousands of patients from Jackson and West Tennessee. His grandfather, Irby L. Grady, O.D. of Jackson, was the first licensed optometrist in Tennessee, and together they accumulated over 100 years of optometric practice in Jackson, with some patients bridging the two generations by transitioning from Dr. Grady to Dr. Wise. He was actively involved in a variety of professional, community and faith-based roles at the local, state and national levels. He was responsible for establishing the Dynamic Maturity program based at Jackson State Community College. This unique program led to the formation of the Harvest Years Club and Senior Citizens Center in Jackson. This first-of-its-kind center in Jackson sought to meet growing needs for social, artistic, and intellectual stimulation among seniors. Dr. Wise served as chairman of the Tennessee Council on Aging as a gubernatorial appointee. Additionally, he lobbied at the local and state levels for passage of some of the first laws to protect senior citizens in Tennessee from discrimination and neglect. In 1970, he was named “Optometrist of the Year” for Tennessee in recognition of his contributions to the community. In 1971, Dr. Wise was privileged to attend the White House Conference on Aging, a once-a-decade conference which makes policy recommendations to the President and Congress regarding senior citizens to promote the dignity, health and economic security of older Americans. Dr. Wise was a long-time member of Forest Heights United Methodist Church where he was active in a variety of capacities. He also served on the first board of Youth Town of Tennessee, and served in a variety of roles with the Heart Fund, United Fund, Community Concerts Association, and the Jackson Jaycees. Merrill is survived by his two children, Merrill S. Wise, III (Reut) of Memphis, TN and Cynthia Margaret Cook of Jackson; by five grandchildren, Collin Shepherd Wise (Alyssa), John Merrill Cook (Sarah), Eileen Margaret Cook (Luke), Grant McSwain Wise, and Laura Grace Wise; and by two great-grandchildren, Luca Plakas Wise and Alessio Plakas Wise. He was predeceased by his beloved wife, Margaret McSwain Wise, and by his sister, Margaret Wise Fly of Dallas, TX, with whom he had a close and loving relationship. Always one to share a story or joke, bring a flower to an acquaintance, or learn something new, many will remember Merrill as one who loved gardening, boating, fishing, water skiing, and model airplane building and flying. He loved spending time with family and friends, and he greatly enjoyed extending warm hospitality to all. He was a loving and loyal husband to his beloved wife, Margaret, who preceded him in death in 2015. Known to his children and grandchildren as “Pops,” his loss is felt by his family and all who had the pleasure of experiencing his kindness for others. SERVICES: Funeral services for Dr. Wise will be held at 1 pm on Saturday, January 19, 2019, at Forest Heights United Methodist Church, with Dr. Paul Clayton officiating. Burial will follow at Ridgecrest Cemetery. The family will receive friends on Saturday from 11:30 am until 1 pm at the church. Pallbearers for the service will include Collin S. Wise, John Merrill Cook, Grant McSwain Wise, Luke Mealer, Joe Fly, Jr., and Philip Byrn. The family requests that memorials be sent to Forest Heights United Methodist Church, 863 W. Forest Avenue, Jackson, TN 38301. Arrington Funeral Directors, 148 W. University Parkway, (731) 668-1111; www.arringtonfuneral-group.com,

The family of Dr. Merrill S. Wise, Jr. created this Life Tributes page to make it easy to share your memories.