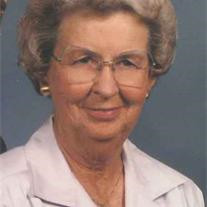 Graveside services for Dorothy M. Trogden, 91, will be held at 10:00AM Friday, February, 24, 2012 at Memorial Park Cemetery in Memphis, TN with Dr. Joe Piercey officiating. Mrs. Trogden died peacefully on Monday, February 20, 2012 at the Northbrooke Health Care facility of Jackson, TN. Arrington Funeral Directors is in charge of arrangements.A native of Memphis, TN, Dorothy was born on December 22, 1920 the daughter of the late Gladys Johnson Moses and William Horace Moses. She was married to the late Robert (Bob) Trogden who preceded her in death in November 2011. She graduated from Tech High School in Memphis, TN in 1938 and spent many years as a bookkeeper for Sears Roebuck, Bartlett Brothers Electric Company, and several florist shops. Later she worked for the Mid-South Fair as coordinator of the 4H, FFA and FHA entries in the fair. When her husband retired in 1975 she became a full time housewife. She and Bob enjoyed golf together from age 15. She won many local golf tournaments and spent many years traveling with her friends to West Tennessee clubs for tournament days. She and Bob spent 25 years traveling in their RV and visited almost every state. In later years, they spent the winter months in Winter Haven, FL and enjoyed golf most every day. She won a Senior Olympics metal in golf as well as club champion. She leaves behind many friends over the years in Florida and Memphis. Dorothy was a member of Aldersgate United Methodist Church of Jackson, TN.She was preceded in death by two brothers, Melvin A. Moses and Horace B. Moses, a sister-in-law Marie Reeder and a niece, Ruth Yarbrough.She is survived by a daughter, Barbara Bean and husband Fred of Jackson, TN; a son, Donald R. Trogden of Jacksonville, FL; granddaughter, Wendy Wood Pine and husband Jim of Nashville, TN; grandson, Craig Wood and wife Kristin Wood of Nashville, TN; great grandchildren, Kristi Pine, Steve Pine, Liana Wood and Liam Wood; step-grandchildren, Cindy Bean Roberson and Alan Bean and their families and a great nephew, Steve Yarbrough of Houston, TX.The family is requesting that memorial contributions be directed to Aldersgate United Methodist church, 1050 N. Parkway, Jackson, TN 38305 or to the charity of the donor?s choice.The family would like to thank the medical staff and employees of Northbrooke Health Care for their loving care and support.The family will be receiving friends on Thursday, February, 23, 2012 from 5:00PM until 7:00PM at Arrington Funeral Directors.Arrington Funeral Directors, 148 W. University Parkway, 731/668-1111 www.arringtonfuneralgroup.com

The family of Dorothy Trogden created this Life Tributes page to make it easy to share your memories.

Graveside services for Dorothy M. Trogden, 91, will be held at...