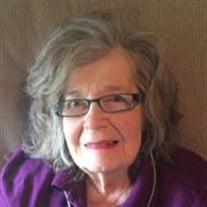 Dorothy Burnette “Dot” Shelton, age 94, died peacefully at her daughter’s home on Tuesday, July 28, 2020. She was born February 24, 1926, the daughter of Samuel Clifton Burnette and Rubye Mae Milam Burnette. On September 25, 1946, she married William D. (Bill) Shelton, Jr. Both music and art were her passions, and both gifts were passed along to each of her children. Dot and Bill were active members of West Jackson Baptist Church, and she was a member and soloist in the choir for many years. She loved being a wife, mother, and homemaker, and when her children became grown, she enjoyed working in the church Child Care Center. Dot loved entertaining, whether it was with family or friends. Every family birthday and holiday were reasons to cook, decorate, and celebrate. Her children remember many laughter-filled evenings with friends, and the Shelton’s were always known for their New Year’s Eve parties. Many card games of Rook were played in their home. She was preceded in death by her parents, her husband, and one son Andy. Dot is survived by one daughter, Jill McCaskill (Keith) of Jackson; and two sons, Skip Shelton (Janis) of Jackson, and Steve Shelton (Lori) of Southhaven, MS; eight grandchildren and eight great-grandchildren. SERVICES: A funeral service will be held Sunday, August 2, 2020 at 2pm with Reverend Lonnie Sanders officiating. Visitation with friends will be from 1pm until service time. A private family burial will be held on Monday. The funeral service will be webcast live via www.arringtonfuneralgroup.com. In lieu of flowers, the family asked that memorials be directed to the Music Ministry at West Jackson Baptist Church, 580 Oil Well Road, Jackson TN, 38305.

The family of Dorothy "Dot" Shelton created this Life Tributes page to make it easy to share your memories.