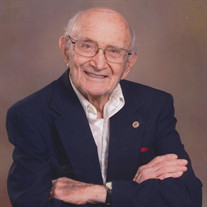 What a rich, full life! What a celebration when one of God’s saints comes home! Don Webb would be the last to claim sainthood; but what is a saint, but a flawed human being who learns to forgive his weakness and that of others. One who lives out his years emulating, as best he can, the example that Jesus left us, loving his neighbor as himself and loving the Lord God with all his soul and all his might. Dr. Don Webb moved from his earthly home on Lambuth Blvd, in Jackson, TN to his heavenly home on Sunday, February 6, 2022, at the age of 100. He was born in Jackson on July 30, 1921, the only son of Johnnie Cockrill and Donald Ross Webb, who was called Billy. The family moved frequently during his childhood and Don attended eight different schools in Louisiana and Texas before graduating from Jackson High School in 1938. Don attended Union University for two years where he met Rebecca (Becky) Powell Cobb from Haywood County. In February of 1940 he joined the National Guard which was activated into Federal Service on September 16, 1940. A week later Don was on a train to Ft. Jackson in Columbia, South Carolina. He and Rebecca married in Jackson on March 24, 1942, and in April went to Camp Barkley in Abilene, Texas for Don to attend Officer Candidate School. In September of 1943 they had their first child, Harriet Rebecca Webb. Don shipped out overseas as Captain and traveled on the Queen Mary to Great Britain. He traveled to France on the SS Leopoldville across the English Channel to Omaha Beach. He was assigned to the 1000 bed, 176 General Hospital near La Haye-du-Puits on the Cherbourg Peninsula until VE Day May 8, 1945. He and his little family moved to Memphis for him to attend University of Tennessee College of Dentistry in January of 1946. They lived at 876 Pope Street and attended Highland Heights Baptist Church where he was baptized. Don graduated in December of 1948, and they moved to 125 Campbell Street in Jackson to the house where both his mother and he were born. In July 1949 Carmen Cockrill Webb was born and the family moved to 530 Wisdom where they lived until 1961 when they moved to 1491 Lambuth. Dr. Tom Dowling invited Don to join his dental practice, located in First National Bank across from Court Square. He practiced dentistry for 42 years, finishing his career with Dental Associates. Don and Becky were very active in ministries of First Baptist Church. Don was Chairman of the Deacons four times and taught Sunday School up until his death. In 1954 he was a founding member of the Past Presidents of the University of Tennessee Dental Association. He was National President of the UT College of Dentistry, National President of Union University Alumni Association, and a founding member of the Kiwanis Club of Jackson and was active in the establishment of Youth Town. Everyone who knew him understood that hunting and fishing were his passions. He entered and judged field trials and always had hunting dogs at home during most of his life. He hunted deer, turkey, quail, pheasant, duck, dove, and antelope, but turkey was an obsession. He could remember details from all his hunting trips to the astonishment of friends and family. People will remember his integrity, generosity, patriotism and unflagging sense of humor. He was an outstanding raconteur and was sought after up into his 90’s as the MC for banquets and meetings. Don was an amazing role model with his positive outlook on life and his interest in continuing to learn. He used a computer and was delighted to discover what Google could do. He read voraciously, with his personal best record being 126 books in the year he turned 95. He was truly an inspiration to all who were privileged to know him. It’s been said that “Success isn’t about how much money you make; it’s about the difference you make in people’s lives.” By that standard and any other Donald Ross Webb’s life was a highly successful one. Don was preceded in death by his lovely wife, Rebecca Cobb Webb. Dr Webb’s memory will be cherished by his daughter, Becky Webb Wilson, and husband Spence, and their children, Spence Wilson, Jr. (Stephanie), Rebecca Macsovits (Mac), Lauren Young (Tommy), Webb Wilson (Tate); by his daughter, Carmen Webb Anderson and her husband, Ron, and their children Melissa Sweazy (Caleb), Lindsey Suber (Neil); and by his sixteen great grandchildren. The family wants to express their great appreciation for the long-time friendship Dr. Webb had with Sue Phillips, his Coffee Group, his Poker buddies, the Kiwanians and his many supporters at First Baptist Church, especially Gail Hamilton, who with Sue, helped him in his last years. SERVICES: A funeral service will be held at 1:30 PM Thursday, February 10, 2022, at First Baptist Church of Jackson, TN with Rev. Aaron Kennedy officiating. The family will receive friends on Thursday, February 10, 2022, from 12:30 PM until the service time. Dr. Webb will be laid to rest in a private family service. He would want any memorials to be sent to First Baptist Church, 1627 N. Highland Ave. Jackson, TN 38301. Arrington Funeral Directors 148 W. University Parkway Jackson, TN 38305 731.668.1111 www.arringtonfuneralgroup.com Memorial contributions can be made here: https://joingenerous.com/arrington-memorial-don-webb-qizvpl4 For more information or to leave comments, condolences, or to sign online guest books, visit the funeral director's website or social media pages using the links found here: Arrington Funeral Directors

What a rich, full life! What a celebration when one of God&#8217;s saints comes home! Don Webb would be the last to claim sainthood; but what is a saint, but a flawed human being who learns to forgive his weakness and that of others. One who... View Obituary & Service Information

The family of Dr. Donald Webb Jr. created this Life Tributes page to make it easy to share your memories.

What a rich, full life! What a celebration when one of God’s...