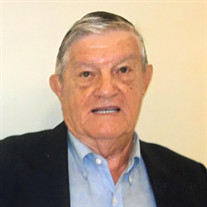 Dewey Nelson Swims, Jr., returned to his heavenly home on January 5, 2021. He was born on December 7,1939 to the late Dewey and Carlotta Morgan Swims. He was a gifted athlete at Portageville High School, graduating in 1958. Dewey attended Murray State University on a football scholarship, later transferring to Memphis State University where he graduated in 1962 with a Bachelor of Science in Education. Dewey was blessed with a large and loving family. He married his best friend Harriet Coda Swims on February 15, 1963 in Memphis, Tennessee. They lived in Memphis and Columbia, Tennessee, before finally settling in Jackson in 1972. Dewey raised his three children with patience, discipline, and unconditional love. He was blessed with eight grandchildren and five great-grandchildren and delighted in spending time at their athletic events and activities. An avid outdoorsman, duck hunting and crappie fishing were his favorite pursuits. He was a mentor to many young men and women, teaching life lessons in the duck blind and his fishing boat. He is dearly missed by his loved ones, who celebrate the fact that he is at peace with his creator. Dewey was a deacon at Calvary Baptist Church and a Mason for many years. In earlier years he played church softball and basketball and coached his son’s sports teams. He lived the verse; I can do all things through Christ who strengthens me. (Philippians 4:13) Other than his parents, Dewey is preceded in death by his sister Clara, and granddaughter Shelby Wyatt. He is survived by his wife Harriet; his son Dewey (Stephanie) Swims; daughters Christy (Harvey) Wyatt and Karen (Otis) Nesbitt; grandchildren Brantley (Julie) Wyatt, Kellye “Betsy” Wyatt, Dewey Nelson (Summer) Swims, IV, Houston (Drew) Todd, Jamal, Joseph and Jana Nesbitt; and great-grandchildren Gracie and Brayden Wyatt, and Treyson, Wyatt, and Iris Todd. SERVICES: A visitation will be on Friday, January 8 from 12:00PM-2:00PM at Arrington Funeral Directors. A graveside service will follow at 2:30PM at Ridgecrest Cemetery in Jackson, TN, with Reverend Wayne Foropoulos officiating. In lieu of flowers, the family requests that donations can be made to the Cystic Fibrosis Foundation (cff.org) or Shriners Hospital for Children (shrinershospitalsforchildren.org). Memories and photos can be shared to [email protected] Arrington Funeral Directors, 148 W. University Parkway, Jackson, TN 38305 731.668.1111 arringtonfuneralgroup.com

Dewey Nelson Swims, Jr., returned to his heavenly home on January 5, 2021. He was born on December 7,1939 to the late Dewey and Carlotta Morgan Swims. He was a gifted athlete at Portageville High School, graduating in 1958. Dewey attended Murray... View Obituary & Service Information

The family of Dewey N Swims created this Life Tributes page to make it easy to share your memories.