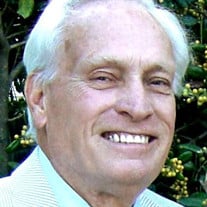 David Edmund Thompson, 83, of Jackson, TN, died peacefully in his home on April 25th with his wife of 59 years and his children by his side. David was born in Orange, New Jersey, on March 8, 1935 to John and Isabell Thompson. He spent his childhood in New Jersey and attended John Brown University in Arkansas where he graduated with a Bachelor’s Degree in Mechanical Engineering. He married his wife Phyllis Carol Kornfeld on August 8th 1958. Together they had 3 children and lived in Arkansas, Connecticut, Florida, Massachusetts, and again in Connecticut then finally retiring in Tennessee in 2003. David was very accomplished in his field of mechanical engineering, he is perhaps most well-known for his invention the “Thompson Roto Stripper” a bestselling product on the hardware market in the late 70s. David was always an active member in his local church. He spent over 40 years as a member of Gideon’s International, an organization most well-known for placing Bibles in hotels, schools, and prisons. David loved participating in many charities including but not limited to: Gideon’s International, International Fellowship of Christians and Jews, Wickliff Bible Translators, Compassion International, and Autism Speaks. Those who knew David well would say that the things he enjoyed most were spending time with his family and friends, making jokes, tinkering around in his shop, and always working on his next invention. David is survived by his wife Phyllis Thompson of Jackson, TN; his daughter and son-in-law, Caroljeanne and Calvin Phillips of Jackson TN, his son and daughter-in-law John and Stacey Thompson of West Haven, CT, his daughter and son-in-law Melody & Carlo Lucatino of Hamden, CT. his brother and sister-in-law Charles and Sid Thompson of Bend, OR, his brother and sister-in-law John Paul & Teddy Thompson of Ozark, MO. He is also survived by 7 grandchildren, 3 great-grandchildren, and 10 nieces and nephews. He is predeceased by his parents John & Isabell Thompson of West Falmouth Massachusetts. A private family burial will be held. A memorial service for David will be held on Friday, April 27th at North Jackson Baptist Church, in Jackson, TN at 1:00 p.m. All are welcome to attend. In lieu of flowers the family is asking for donations to David’s favorite charities, Gideon’s International and Monica Rose Care Fund for his Great-Granddaughter’s healthcare: https://www.gofundme.com/Monica-Rose-Care-Fund. Arrington Funeral Directors, 148 W. University Parkway, Parkway, Jackson, TN 38305, 731.668.1111.www.arringtonfuneralgroup.com

David Edmund Thompson, 83, of Jackson, TN, died peacefully in his home on April 25th with his wife of 59 years and his children by his side. David was born in Orange, New Jersey, on March 8, 1935 to John and Isabell Thompson. He spent his childhood... View Obituary & Service Information

The family of David Edmund Thompson created this Life Tributes page to make it easy to share your memories.