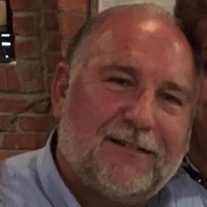 David Montgomery Hardee was born on May 26, 1953, to the late Alta Ruth Montgomery and Robert Hardee. He died on March 17, 2021 after a courageous and faith-filled battle with COVID. David was born in Jackson and raised in Denmark, Tennessee. He graduated from North Side High School in 1971 and from UT Martin (where he was a proud ATO, cannons and all) in 1975. In 1978 he received his Juris Doctorate from Cumberland School of Law at Samford University. He began practicing law with the late Judge Whit LaFon and became a partner in 1982. Hardee, Martin & Owens, his present firm with Bradley Owens, was formed by David and his longtime partner Patrick Martin in 1986. David was a “lawyer’s lawyer” who loved his legal work and woke up early every day to get to the office. He truly cared about each and every client he helped and took on their battles as his own. He was admitted to practice in all Tennessee courts and the U.S. District Court for the Western District of Tennessee. He was a member of the local, state, and American Bar Associations, the state and American Associations for Justice, and the Inns of Court (Master). David was passionate about politics and was President of the Tennessee Young Democrats in 1984, was the local chairperson for the presidential primary campaign of Gary Hart, and was a member of the original Gore Corps, riding a bus overnight to Iowa for the caucus in 1988. Most important to him was his faith in Jesus Christ. He served on the Faith Health Center Board and was an active member of Northside Church. David has said many times that if his life leads one person to know Jesus, it was a life well spent. His favorite verse, said and lived, was “I can do all things through Christ, who strengthens me.” Philippians 4:13. David is deeply loved by his wife of 25 years, Tammy Cox Hardee; his children Angela Snider (Karl), Danielle Hardee (Eric Rooks), Katherine Alexander (Callaway), Laura Beth Hardee, Brian Weir (Danielle), and Heather Williams; his grandchildren Kaylee and Cole Snider, David and Emmett Rooks, Callaway Alexander II, Paxton and Gage Weir, and Shelby and Aidan Robertson; his sisters Sylvia DiMarco (Joe) and Rayna Bomar; and nieces and nephews. He was predeceased by his parents, a brother-in-law Hugh Bomar, and a nephew Samuel David Bomar. David was always ready to talk about his kids and grandkids, the UT Volunteers, the St. Louis Cardinals, his incredible garden which he readily shared, golf trips and shenanigans with his buddies, his love for good rock & roll (so take those old records off the shelf!), and his beloved Charlie the Bulldog. A service will be held at Northside Church on Sunday, March 21st at 5:00 p.m. with visitation beginning at 2:00 p.m. Social distancing and face masks are required and will be enforced. The service will be livestreamed on Northside Church’s Facebook page. A private burial will follow. Pallbearers will be Lewis Cobb. Bradley Owens, Tom Jones, John Carson Denny Dix and Warner Hassell. Honorary Pallbearers will be David Larsen, Patrick Martin, Hugh Harvey, Jr., Rick Webb, Larry Nace, Richard Beech and Bill Ragon. David's Sunday school class is asked to sit in a group for the service. In lieu of flowers, memorials may be sent to Women of Hope Recovery Center, P.O. Box 94, Medon, TN 38356 or RIFA, PO Box 2301, Jackson, TN 38302.

David Montgomery Hardee was born on May 26, 1953, to the late Alta Ruth Montgomery and Robert Hardee. He died on March 17, 2021 after a courageous and faith-filled battle with COVID. David was born in Jackson and raised in Denmark, Tennessee.... View Obituary & Service Information

The family of David Montgomery Hardee created this Life Tributes page to make it easy to share your memories.