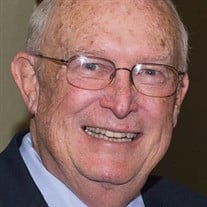 Darrell William Christian of Naples, FL and Jackson, Tn, died peacefully on April 9, 2018 in Naples, FL after a courageous battle with illness. Darrell was born March 22, 1941 in Boone, Iowa to parents Lester Leon and Hazel Martin Christian. He was raised on a farm in Northwestern Iowa by his grandparents Amanda Christian and Earl Boswell where he learned well the principles of hard work, responsibility and perseverance. Darrell graduated from Lake City High School, Iowa in 1961 where he was involved with student leadership as well as lettering in multiple sports. Darrell enjoyed playing the trumpet and rhythm guitar in the high school band and was founding member of “The White Bucks” band. Upon graduation Darrell enrolled at Iowa State University on a football scholarship and earned a degree in Chemical Engineering in 1965. Darrell began a lifelong career in 1965 as an executive with the Proctor and Gamble Corporation. He worked in Cincinnati, OH three different times as well as working in Omaha, NB, New York City, NY, Jackson, TN and Caracas, Venezuela. Darrell was the youngest ever plant manager at the famed Ivorydale Plant in Cincinnati. He also served as plant manager at the Jackson, TN plant from 1984-1991. Darrell moved to Caracas, Venezuela in 1991 where he served for 3 years as Director of Product Supply for all South America. Darrell retired from P & G in 1996. Community Service was an important part of Darrell’s life as he served as the President of the Jackson Area Chamber of Commerce, President of United Way of West Tennessee, Rotary Club Paul Harris Fellow, and Businessman of the Year for the Florida Republican Party. Darrell was also recognized for his service when he received the Jackson Exchange Club’s prestigious “Man of the Year” award. Darrell was an avid aviator owning an airplane for over 40 years. He enjoyed baseball and was a member of the ownership group of the AAA Diamond Jacks an affiliate of Chicago Cubs. Darrell also enjoyed playing golf and was a member of the Jackson Golf and Country Club, Jackson, TN; Quail Creek Country Club, Naples, FL; and the Beech Mountain Country Club, Beech Mountain, NC. Darrell was a voracious reader. Darrell enjoyed traveling the world and has visited all seven continents and the Seven Wonders of the World. Darrell is beloved and was devoted to his family. He is survived and will be deeply missed by his wife and best friend Elaine. Darrell is also survived by his daughter Kitty and husband Lars Wennborg, Charlotte, NC; son Matthew Christian and wife Susan, Columbia, SC, son Trey Cleek and wife Carolina, Jackson, TN; and son Matt Cleek and wife Lauren, Jackson, TN. Darrell has 7 grandchildren: Linnea, Emma, and Markus Wennborg; Lindsey and Matthew Christian; Miles and Miller Cleek. SERVICES: Services will be conducted at Arrington Funeral Home in Jackson, TN. Visitation will be from 3-5 on Sunday, April 15, 2018 and Funeral services will be conducted by Rev. Don Thrasher at 11 am on Monday, April 16th at Arrington. A celebration of life will be held in Naples, FL at a later time. Those serving as Honorary pallbearers will be Roger Murray, Jr., Buster Ferguson, Jim Richardson, Joe Richardson, David Farmer, Larry Brooke, Harry Boosey and Steve Champ. In lieu of flowers, the family requests donations made to the Jackson Madison County Library Foundation, 433 E. Layfette St, Jackson, TN 38301 or the Carl Perkins Center for Abused Children, 171 Airways Blvd, Jackson, TN 38301. Arrington Funeral Directors, 148 W. University Parkway, Jackson, TN 38305.731.668.1111.www.arringtonfuneralgroup.com.

The family of Darrell W. Christian created this Life Tributes page to make it easy to share your memories.