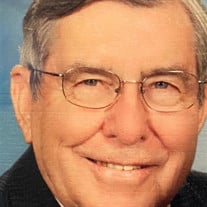 Curtis Neal King peacefully passed away to be with his savior on Wednesday, October 21, 2020 at the age of 87. Born in Mercer, TN, Mr. King was the son of the late William Neal and Vashti Gertrude King. He enlisted in the U.S. Army in 1951 where he served in the Korean War. One of eight children, Mr. King leaves behind two sisters, Peggy Rial (Hamilton) of Greensboro, NC; and Martha Jane King of Mount Judea, AR. Preceding him in death were his brothers, Harmon “Buck” King, Monroe “Shorty” King, and his sisters, Sybil Thornton, Nancy Brannon, and Marlene Fields; and great grandson, Beau Patterson. Mr. King joins in heaven his loving wife of 63 years, Patsy Slayton King. In 1958, Curtis and Patsy moved to Humboldt, TN from Memphis, TN; they started King Tire Company in 1958, where it has seen three generations build the legacy that is continuing today. Curtis started City Tire Company on Main Street in Humboldt, TN; which grew today to three retail stores known as King Tire Company in Humboldt and Jackson. In 1971, he expanded his tire business into a wholesale company, Tire Distributors which services the five surrounding states. He and Patsy have two children, Ricky Slayton King and Georgann (Steve) McFarland. He was the best Gang Gang to seven grandchildren and 15 great grandchildren. Curtis was an active member of the Church at Sugar Creek where he faithfully attended Mr. Jerry Culpepper’s Sunday school class. During his lifetime he was involved in many organizations and would lend a helping hand to anyone; he served on the Tennessee Tire Dealers Association from 1975-2005 (President -1985), Tennessee Wildlife Resource Association 1993-1999 (Chairman - 98-99), Humboldt Masonic Lodge #202 (Past Master), and he was honored in the 69th Annual West Tennessee Strawberry Festival as the Honoree. If there was ever someone who loved the outdoors, Curtis was it. From being an avid duck hunter at Horns Bluff, Kings Island and Twin Rivers Lodge in Bagota, TN, to fishing at Twin Lakes he enjoyed it all. Many memories that family and friends hold dear to their hearts were centered around these hobbies. A celebration of life service will be held at the Church at Sugar Creek in Humboldt, TN, on Saturday, October 24, at 11am. In light of honoring social distancing there will be no visitation hours. A graveside service will follow at Rose Hill Cemetery in Humboldt, TN. The family has requested that memorial contributions be directed to Sugar Creek Children’s Wing Building Fund, 3400 E. Mitchell Street, Humboldt, TN. Arrington Funeral Directors, 148 W. University Parkway, Jackson, TN 38305.731.668.1111

Curtis Neal King peacefully passed away to be with his savior on Wednesday, October 21, 2020 at the age of 87. Born in Mercer, TN, Mr. King was the son of the late William Neal and Vashti Gertrude King. He enlisted in the U.S. Army in 1951 where... View Obituary & Service Information

The family of Curtis Neal King created this Life Tributes page to make it easy to share your memories.

Curtis Neal King peacefully passed away to be with his savior...