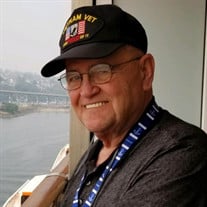 Clifford Walter Tower, age 74 of Humboldt, Tennessee, died Saturday, January 23, 2021 at the Tennessee State Veterans’ Home in Humboldt after a short illness. Clifford was born in Springfield, Massachusetts on November 22, 1946 and lived most of his life in Texas and West Tennessee. He was an honorable service member and was proud to serve his country in the Vietnam War. He was an active member of First Assembly of God in Humboldt and loved fishing, spending time with his family, and spreading the word of God to others. He was preceded in death by his beloved wife Judy of 31 years, a daughter Stacey, and a brother-in-law Edward Hart. He is survived by his children, Jennifer Baker (Mark) from Humboldt, Tennessee and James (Tiffany) Holmes of Brighton, Tennessee; brother, Jerry (Sharon) Tower from Longmeadow, Massachusetts and sister, Joyce Hart from Trinity, Alabama; grandchildren, Kayla Crook from Oxford, Mississippi, Olivia (Riley) Morris from Jackson, Tennessee, Briley Holmes, Skylar Holmes, Gage Holmes, and Ty Holmes from Brighton, Tennessee and Sam Baker from Humboldt, Tennessee; great-grandson, Oliver, from Jackson, Tennessee; nieces and nephews, David and Lauren Tower from Massachusetts, Walter Adams from Vermont, and Brandy (Piotr) Jankowski from Trinity, Alabama; and great nieces and nephews, Helena, Emma, Anna, Isabella, and Marek Jankowski from Trinity, Alabama. A private graveside service will be Friday, January 29, 2021 at Rose Hill Cemetery in Humboldt, Tennessee where he will be laid to rest beside his wife Judy. Arrington Funeral Directors 148 W. University Parkway Jackson, Tennessee 38305 731-668-1111 www.arringtonfuneralgroup.com

The family of Clifford Walter Tower created this Life Tributes page to make it easy to share your memories.