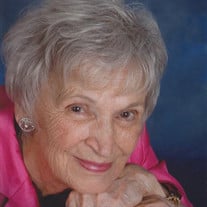 Cleita Faye Johnson, born January 25, 1932, passed away peacefully at her Jackson, TN residence on November 9, 2020. She was preceded in death by her husband of 67 years, Nathan Lynn Johnson, her parents George Hobart and Mary Ruth Hundley Sipes, and six siblings. She is survived by her children, Tony Johnson (Suzi) of Bartlett, TN, Vicky Forsythe (Bill), Ronnie Johnson (Susan), and Cindy Bell (Larry) all of Jackson; sister Ileen Shoemaker (Jerry) of Huntsville, AL, and sister-in-law Phyllis Sipes of Jackson, TN, and her dearest friend of over sixty years. She was a devoted and loving wife, mother, grandmother, and great-grandmother. Nothing pleased her more than spending time with her family, including eleven grandchildren and eighteen great-grandchildren. Faye and Nathan were devoted members of Poplar Heights Baptist Church for over sixty years and served in many different aspects of the church. In later years they enjoyed the fellowship of many friends with their Sunday night gatherings. Faye was a 1949 graduate of Jackson High School, where she met Nathan. She attended West Tennessee Business College and worked in several offices in downtown Jackson before joining National Bank of Commerce. After retirement, Faye enjoyed accompanying Nathan at Johnson Properties. She loved meeting and talking to the people who frequented their office. During this time of Covid, the family will have a private graveside service at Ridgecrest Cemetery on Wednesday, November 11. Longtime family friend and pastor, Larry Murphy will lead the memorial service. Arrington Funeral Directors is in charge of arrangements. The family would like to thank Home Instead Caregivers, West Tennessee Home Health, West Tennessee Hospice, and the special private sitters who so lovingly cared for Faye with dignity and respect for the past months. A special thank you also goes to Englewood Baptist Church Senior Ministry for the visits, calls, and prayers over the past few years. In lieu of flowers, the family requests memorials be directed to Poplar Heights Baptist Church, 1980 Hollywood Drive, Jackson, TN. Arrington Funeral Directors, 148 W. University Parkway 668.1111 www.arringtonfuneralgroup.com

Cleita Faye Johnson, born January 25, 1932, passed away peacefully at her Jackson, TN residence on November 9, 2020. She was preceded in death by her husband of 67 years, Nathan Lynn Johnson, her parents George Hobart and Mary Ruth Hundley... View Obituary & Service Information

The family of Cleita Faye Johnson created this Life Tributes page to make it easy to share your memories.