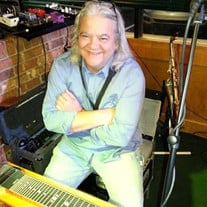 Chuck McGill was born in Humboldt TN on December 15th, 1954 to Charles Henry McGill Sr. and Doris Kathleen Buckingham. He attended school in Humboldt, TN and graduated from Humboldt High School in 1973. His musicianship began in the Humboldt High School band where he played alto saxophone. He loved his band director Tom Hay very much and always thanked him for helping mold his musical career. His love of music continued to grow throughout his life. Chuck also loved to ride dirt bikes as a kid and had many trophies he had won in races but music was always his true passion. On Sunday afternoons Chuck and classmate, Mike DeBerry, would get together and play guitars and sing. The first group Dad was a part of was Turkey Creek Bottom Band. The first gig they had was at Dr. Tom Crenshaw’s barn out in Crockett County. Around that time Chuck got his first Steel Guitar, an instrument he loved very much. Chuck was a very versatile musician. He played any instrument he picked up and played it well. He also played a variety of styles of music. He played not only with The Paula Bridges Band and The Bandstand Review, both of which play a variety of styles of music, he also played tenor saxophone with the Jackson Community Swing Orchestra for a couple years. When Chuck merged with the band Paula and Arrow in 1981 The Paula Bridges Band was formed. Chuck married Paula Bridges in 1982 and they continued to play music together for 35 years. Katie was born in 1992 and Emily followed in 1998. Chuck and Paula both said that no other performance was ever as wonderful as performing with their children. The most special thing about Chuck was the fact that he never wanted the limelight. He allowed everyone he performed with, especially his wife and two daughters, to shine as brightly as they could. Chuck continued to perform with Paula in The Bandstand Review at Mulligan’s in Jackson every Friday night. They still had a regular following and could always make the people listening to their music feel like a family. Tuesday, August 11, in the early morning, Chuck suffered a massive heart attack. Facebook was overwhelmed with tributes, kind words, and prayers for the family and many were shocked at the loss of such a kind, loving, and talented man. Sunday on the Carl Perkins Center Circle of Hope Telethon, Chuck was honored for his willingness to always serve and provide his beautiful music to help raise money for all of those children in need. He always had a smile on his face and was always willing to help a child or anyone that needed it. SERVICES: A memorial service for Chuck McGill will be held 3:00 PM Sunday August 23, 2015 at First United Methodist Church in Humboldt, TN. The family will receive friends from 2:00 PM until 3:00 PM prior to the service at the church. The family has requested that In lieu of flowers that memorial contributions be made to The Chuck McGill Memorial Fund at The Foundation of West TN Healthcare, 620 Skyline Dr. Jackson, Tn. 38301 or First United Methodist Church, 200 N. 12th Ave., Humboldt, TN 38343. Arrington Funeral Directors, 148 W. University Parkway, Jackson, TN 38305. 731.668.1111. www.arringtonfuneralgroup.com.

Chuck McGill was born in Humboldt TN on December 15th, 1954 to Charles Henry McGill Sr. and Doris Kathleen Buckingham. He attended school in Humboldt, TN and graduated from Humboldt High School in 1973. His musicianship began in the Humboldt... View Obituary & Service Information

The family of Chuck McGill created this Life Tributes page to make it easy to share your memories.