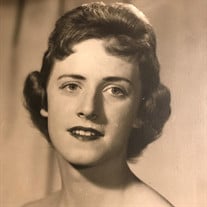 Charlotte Ann Wheeler Ellis was born on August 13, 1942 to A. C. and Mary Wheeler in Booneville, MS. She joined her Heavenly Father on October 24, 2019 surrounded by family and friends. The care she received up to the very end from the doctors and nurses at JMCGH was beyond compassionate. She was born with a great sense of humor and a zest for family and friends that she carried that with her until the last beat of her heart. Her Dad was a WWII veteran and her Mom a lifelong employee at JC Penney in Corinth. Charlotte was a mischievous prankster well known for her pre-teen antics, like the time she painted a cat! In the early 1950s the family relocated to Corinth, MS and it was here that she met the love of her life…the clarinet! Not really – but she did play the clarinet in the Corinth High School Marching Band. The true love of her life was a young man two years her senior, an athlete, a prankster and a man of many nicknames: Troy Edward “Ed” Ellis – known as “Swish” to many of his pals. He and Charlotte met after multiple horn honks in Ed’s direction aimed at the second-floor apartment he shared with his Dad in the summer heat of 1958. Thus, began a courtship that would always include the love of sports. Charlotte was constant fixture at all of her kids and grandkids games regardless of the season and loved cheering for UT and Ole Miss on Saturdays in the fall. While Charlotte was still a senior, and soon to be named “Wittiest” in the Corinth High School Class of 1960, Ed was pursuing a career in journalism and baseball – in the end office products were his true calling. The two lovebirds were married in June of 1960 and that remained so for 59 years. They would go on to have four children beginning with first daughter, Jill, then Jan, Russ and Holly. She was considered a second Mom to many and dear to her her was Amy Sturdivant Parker (Mitch). Charlotte, a stay at home Mom throughout her kids’ early years, was both strict disciplinarian and advocate for her husband and children, insuring that their roles in society would be a Christ based life of service and a proclivity to be self-sufficient. In 1980 Charlotte and Ed joined North Side United Methodist Church, then a small country church in North Jackson. The two have remained devout members there for 40 years and the church friends they’ve made have been a constant foundation of love and support. In fact, they have been in the same Sunday School Class - Seekers - since the time they joined. The annual “Seekers” Christmas party was a highlight of Charlotte’s year. Charlotte, “Mimi” was a Wife, Mother, Grandmother and Friend. No doubt all who walked in her shadow drew great benefit from doing so. She fought hard to the very end, but her body gave out. We are comforted to know that her soul rests in heaven. She is preceded in death by her Father, A.C. Wheeler, her Mother, Mary Wheeler and Son-in-law, Clay Herr. She is survived by her husband, Ed, and their kids, Jill Ellis Herr, Memphis, TN, Jan Shock (Roger), Chrystal Springs, MS, Russ Ellis (Karen), Jackson, TN and Holly McClung (Kevin) Franklin, TN. Her brother, Jimmy Wheeler (Cathy), Corinth. MS and their kids, Kim, Mark, Laurie and Hank. Additionally, she is survived by 12 grandchildren, who she doted on endlessly, Addison Shock (Logan), Taylor Shock, Carson Shock, Kennedy Shock, Rusty Ellis, Camden Shock, Keaton Ellis, Claire McClung, Annabelle McClung, Asher McClung and Genevieve McClung. Charlotte’s Funeral will be held on Monday, October 28, 2019 at 11:00am at North Side United Methodist Church. Pallbearers will be Danny Clark, Ward O’Keefe, David Wright and grandsons, Addison Shock, Rusty Ellis, Camden Shock and Asher McClung. In Lieu of flowers, memorial donations can be made to the North Side United Methodist Church Memorial Fund.

Charlotte Ann Wheeler Ellis was born on August 13, 1942 to A. C. and Mary Wheeler in Booneville, MS. She joined her Heavenly Father on October 24, 2019 surrounded by family and friends. The care she received up to the very end from the doctors... View Obituary & Service Information

The family of Charlotte Ann Wheeler Ellis created this Life Tributes page to make it easy to share your memories.