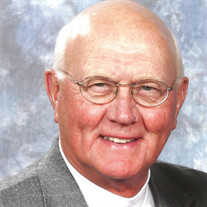 Mr. Charles Nelson Roth passed away Tuesday morning April 10th at Jackson Madison County General Hospital after a prolonged illness. Mr. Roth was born September 17, 1937 in Stuttgart Arkansas to Ray and Dorothy Roth. Charles attended Stuttgart High School and played football for the Ricebirds. Following high school, he attended the University of Arkansas where he met his wife of 59 years Georgia Ann Middlebrooks Roth. The two were married August 16, 1958. While at Arkansas, he was a member of the Air Force ROTC and was selected as a Distinguished Military Student. He along with his wife Georgia were the recipients of the Neil Harlan Award. He was a marketing major, who was president of SAM, treasurer of the Marketing Club, member of Alpha Kappa Psi, active in Blue Key and the Student Senate. He graduated from Arkansas with a Bachelor of Science in Business Administration. Following his graduation, he served 3 years in the Air Force and was stationed in Savannah, GA and Goose Bay Labrador. Following his stint in the Air Force, he lived in Shreveport, LA and worked for the J.C. Penney Company. Charles and Georgia moved to Jackson, TN in 1965. Mr. Roth worked at Middlebrooks Motors for several years, and then began a new career with New York Life Insurance. He was a Charter Life Underwriter and Chartered Financial Consultant. He received a Master of Business Administration from Memphis State University. Following several years with NYL, he was the Executive Director for the Small Business Development Center. He also taught business classes at night at Jackson State Community College and Union University. He served the Jackson community as a member of the Jackson Jaycees and Rotary. He was a member of the Exchange Club, served as Exchange Club President and was instrumental in helping begin the Exchange Club-Carl Perkins Center for the Prevention of Child Abuse. He was President of Life Underwriters. He also served as a board member for Lifeline Blood Services. Mr. Roth was a Jackson Chamber of Commerce Red Coat Ambassador. He was a member of First United Methodist Church and attended the Religion for Life Sunday School Class. As well as being a lifelong Razorback fan, he was a faithful follower of the Dallas Cowboys and St. Louis Cardinals. Charles had a passion for golf and even recorded a hole-in-one on July 6, 2003 at the age of 65. He enjoyed hunting and fishing with his sons and grandsons. Charles is survived by his wife, Georgia Roth, his three sons: Todd Roth and wife Lisa of Oxford, MS., Doug Roth and wife Michelle of Jackson, TN and Rankine Roth and girlfriend Kim Hammon of Pegram, TN. Charles has three grandsons: Hunter, Houston and Hays Roth all of Oxford, MS., a sister in law, Joey Roth of Harrison, AR and a younger brother, Roland Roth and wife Regina of Newark, DE as well as 4 nephews and 2 nieces. In addition to his parents, his older brother, Jim Roth, preceded Charles in death. Visitation will be Saturday, April 14th from 10:00 a.m. until 12:00 noon with the funeral at 12:00 noon at First United Methodist Church. Graveside services will follow at Ridgecrest Cemetery. In lieu of flowers, the family requests memorials be made to First United Methodist Church, 200 S. Church St., Jackson, TN, the Dream Center of Jackson, 1970 N. Highland Ave., Jackson, TN 38305 or St Jude’s Children’s Research Hospital, 501 St. Jude Place, Memphis, TN 38105. Arrington Funeral Directors, 148 W. University Parkway, 668-1111 www.arringtonfuneralgroup.com

The family of Charles N. Roth created this Life Tributes page to make it easy to share your memories.