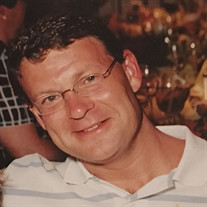 Charlie Dyer, 54, passed away on Saturday, October 19, 2019, in Jackson TN. Although Charlie was born in Gary, IN, his family is from West TN where he received an education in the public school system from Highland Park and Lincoln Elementary Schools, Tigrett Jr. High and Jackson Central Merry High School. Charlie was also a graduate of Lambuth College receiving a Bachelors of Arts Degree in Philosophy and Political Science. During his university years, Charlie took off a semester to manage the Al Gore for President campaign in Alabama. After studying at Fuller Theological Seminary in Pasadena, CA, Charlie returned to West TN to further his career in politics. He was instrumental in the Democratic campaigns of Congressman John Tanner, Gov. Ned McWherter, Gov. Phil Bredesen and State Rep. Matt Kisber to name a few but it was Republican Don Sundquist who appointed Charlie to the TN Economic Development Department where he served for a number of years. In later years, Charlie was an accomplished artist. First in folk art and then in oil paintings, which were sold on both coasts and mainly in the Mid-South. Charlie was a deeply spiritual and philosophical thinker enjoying all forms of history and knowledge in general. Charlie was also know for his love of walking the family boxer, Ellie, around town. Leon T. Dyer and an infant sister, Patricia, preceded Charlie in death. Survivors include his mother, Roselyn Dyer, beloved wife of 16 years, Sassene Sumner Dyer, 2 sons who he was so proud of, William Dyer of Nashville and Jay Boyd of Memphis. Two siblings both of Jackson, Jimmy Dyer (Rhonda) and Sandra Presson (Ted), numerous nieces and nephews and one grandson, Auvi Boyd. A gathering of family and friends will begin at 10:00 a.m. on Saturday, October 26, at Arrington Funeral Chapel in Jackson TN with the memorial service immediately following at 11:00 a.m. In lieu of flowers, the family would be honored with any memorials directed to Hollywood Cemetery Asso. (Road Maintenance Fund), P.O. Box 3975, Jackson TN 38303, where Charlie found solace from his childhood until his untimely passing.

Charlie Dyer, 54, passed away on Saturday, October 19, 2019, in Jackson TN. Although Charlie was born in Gary, IN, his family is from West TN where he received an education in the public school system from Highland Park and Lincoln Elementary... View Obituary & Service Information

The family of Charles Edward Dyer created this Life Tributes page to make it easy to share your memories.