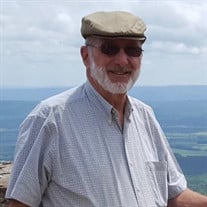 It is rare to find a mind that is as brilliant as the stars, a personality that expresses a passion in all it does, or to witness an unrelenting sense of curiosity and discovery. Yet those are the descriptions of one man – Carl Barry O’Cain. Mr. Carl Barry O’Cain, beloved husband, father, and grandfather, departed this life on Friday, July 30, 2021, at his home in the company of his adoring family. He was born on April 29, 1940, in Orangeburg, South Carolina, the third son of the late John Ennis O'Cain, Sr. and Leila Elaine McFadden O'Cain. He grew up in a large Irish family with two older brothers and a younger sister. Carl loved the Lord and was of the Methodist faith. Carl graduated from Bowman High School in Orangeburg County, SC. He was accepted into South Carolina’s preeminent military college, The Citadel, where he earned a bachelor’s degree in electrical engineering. After college, Carl joined the United States Air Force and was stationed at Tyndall Air Force Base in Panama City, Florida. During this time, he married Diane Tinker of Parsons, TN and they had two children, Sean Barry and Heather Lea O’Cain. He left the Air Force as a decorated officer to join the teams working at the newly formed National Air and Space Administration (NASA). Now stationed at Cape Canaveral, FL, Carl worked as an engineer with the Chrysler Corpora tion’s Space Division that developed and built the first stage of the Saturn 1B rocket used in the early Apollo missions. When politics caused a slowing in the NASA projects, Carl moved his family to Tennessee to take over operations of the family building supply company, Tinker Home Center. He spent 20 years in Parsons, Tennessee growing the business and starting Shamrock Construction Company which built homes in West Tennessee. In the late 1980s Carl moved to Jackson, TN where he worked as a real estate appraisal expert and traveling catastrophe claims adjuster. During this time, he met his beloved wife and soul mate, Jo Wilbur Horton. Jo and Carl were married on December 23, 1992. They blended their families to become one and shared 29 years of love and happiness. Carl’s love of science led him to an unusual hobby - winemaking. Carl and Jo decided to turn his hobby into a business and together they founded Century Farm Winery and Vineyard just outside Jackson, TN. The winery quickly became a success and Carl earned many awards and accolades for his excellence and craftsmanship. Carl was a passionate man who enjoyed many interests, one of which being a private pilot. He was a dedicated leader for the Boy Scouts of America where he guided his son, nephews, and other young men through learning various sciences. Carl was a member of the Lions Club, Exchange Club, Tennessee Viticulture Oncology Society and Tennessee Farm Winegrowers Alliance. He was appointed twice to serve on the Tennessee Viticulture Advisory Board by Tennessee Governors Bredesen and Haslam. Carl was preceded in death by his parents, a son, Sean Barry O’Cain, and two older brothers, John E. O’Cain, Jr. and Paul D. O’Cain. He will be tremendously missed and never forgotten by his devoted wife of 29 years, Jo Wilbur O’Cain; a loving daughter Dr. Heather O’Cain Donato, and her husband Dr. Robert A. Donato; two grandchildren, Houston and Caroline Donato; a step daughter Amy Horton Bunton, and husband Michael, of Franklin, TN; a step son Bart Horton, and wife Neka, of Jackson, TN; five step-grandchildren, Lila and Ford Bunton, Will and Miles Horton, and Isaiah Allen; a step-great granddaughter, Nevaeh Allen; his younger sister, Judith O’Cain Coker of Turberville, SC as well as many other family, friends and neighbors who will mourn his passing. Funeral Services will be held on Tuesday, August 3, 2021, at 11:30 a.m. at Grace Bible Fellowship. Visitation with the family will be from 10:00 a.m. until the time of the service at Grace Bible Fellowship. Bro. Bill Williamson will officiate, and interment will follow in the Andrew’s Chapel Cemetery. Military Honors will be presented by the Vietnam Veterans of America Honor Guard. Memorial contributions are suggested to the Andrew’s Chapel Cemetery Fund, 3828 Brownsville Highway, Jackson, TN 38301 or St. Jude’s Children’s Research Hospital, PO Box 1000-Dept. 142, Memphis, TN 38148 To make a memorial donation online go to: www.joingenerous.com/arrington-memorial-carl-barry-ocain-sp33k7w Arrington Funeral Directors, 148 W. University Parkway, 731-668-1111 Jackson, TN 38305

It is rare to find a mind that is as brilliant as the stars, a personality that expresses a passion in all it does, or to witness an unrelenting sense of curiosity and discovery. Yet those are the descriptions of one man &#8211; Carl Barry O&#8217;Cain.... View Obituary & Service Information

The family of Carl Barry O'Cain created this Life Tributes page to make it easy to share your memories.

It is rare to find a mind that is as brilliant as the stars,...