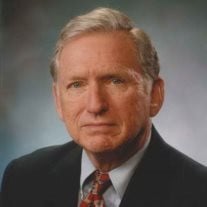 Burnett Royal Hickey, Jr., 85, passed away after an extended illness on January 30, 2014. Royal was born on January 21, 1929 in Greenville, Mississippi to the late B. Royal Hickey, Sr. and the late Grace Wall Hickey. He grew up in Jackson, Mississippi, graduating from Jackson’s Central High in 1947. He attended the University of Mississippi graduating with a commercial art degree with the ambition of becoming a portrait artist. Upon graduating he entered the U.S. Army’s Adjutant General’s Corps, serving as a Top Secret Control Officer for General Maxwell Taylor during the Korean War. After Korea, Royal returned to Ole Miss and this time got a degree in Pharmacy and a wife. He met and married Clare Wilkinson and together they began a life together that spanned 56 years. He bought his first drug store in Trenton, TN in 1959. Finding no golf course there he started Trenton’s Pinecrest Country Club and served as its first President. In 1962, he added Hayes Avenue Pharmacy in Jackson and went on to build a mini chain with stores in three states. Seeing the discounter getting into the drug store business, he decided to expand his interest. He designed and built Hidden Valley Golf Course with George Curtis. He also, began developing residential subdivisions such as the Timbers, Windemere and Sutton Place. He was on the founding board of Old Hickory Academy, now USJ. After a “small” misstep in the car business, Royal and Clare entered the Real Estate Business. He was number one in sales for all of Jackson in 1983. In 1984, he founded what is now Coldwell Banker, Real Estate Now. Since that time he has served as President of the Jackson Area Association of Realtors, a charter member of the Jackson Good Morning! Rotary Club and a member of the Industrial Development Board. In 2006, Royal sold CB, Real Estate Now to Coldwell Banker Barnes based in Nashville, Tennessee. After which, he enjoyed semi retirement filled with family and friends. His walk with Jesus Christ was central in his life. As part of that walk, he attended and was a member of Northside United Methodist Church. He is survived by his wife Clare Hickey of Jackson, TN; two sons, David W. Hickey and wife Tracy of Jackson, TN and John C. Hickey of Los Angeles, California; a daughter, Clare Royale Hickey Campbell of Memphis, TN; four grandchildren, William Dyer, Graham Campbell, Virginia Clare Hickey and Griffin Campbell. SERVICES: A funeral service will be held at 1:00 PM Saturday, February 1, 2014 in the sanctuary of Northside United Methodist Church with Dr. Don Thrasher officiating. A private burial will follow in the Somerville, TN Cemetery. The family will be receiving friends on Saturday, February 1, 2014 from 11:00 AM until 1:00 PM at Northside United Methodist Church. In Lieu of flowers the family is requesting donations be directed to Youth Town, P.O. Box 1385 Jackson, TN 38302-1385. Arrington Funeral Directors 148 W. University Parkway 731/668-1111 www.arringtonfuneralgroup.com

Burnett Royal Hickey, Jr., 85, passed away after an extended illness on January 30, 2014. Royal was born on January 21, 1929 in Greenville, Mississippi to the late B. Royal Hickey, Sr. and the late Grace Wall Hickey. He grew up in Jackson,... View Obituary & Service Information

The family of Burnett Royal Hickey Jr. created this Life Tributes page to make it easy to share your memories.

Burnett Royal Hickey, Jr., 85, passed away after an extended...