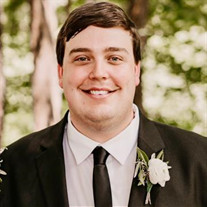 On Thursday, June 11, 2020, Brady Adam Teague passed from his earthly home to his eternity in heaven at the age of 26. He was born on December 23, 1993 in Jackson, Tennessee, the son of Bart and Audra Teague. Brady had one of the biggest hearts of anyone you will ever meet. He was truly sunshine on a cloudy day. Nothing brought him more joy than singing, and he had the voice of an angel. He was part of the Kincaid-Gooch Voice Studio family for 10 years, and the hours spent there were some of the best of his life. From kindergarten through the twelfth grade, Brady attended Trinity Christian Academy, graduating in 2012. While at TCA, he was active in theatre, choir, and played varsity tennis. After high school, he attended Union University, earning a degree in Spanish with a minor in public relations. Brady was a member of Alpha Tau Omega fraternity and loved his brothers dearly. For the past two years, he was a financial advisor at Cumberland Heights in Nashville, Tennessee. Brady accepted Jesus Christ as his Savior in 2001 and the love of Jesus flowed through him. He was a member of West Jackson Baptist Church where he grew up participating in numerous youth group trips and mission trips. He touched more people’s lives in 26 years than most people do in a lifetime. Brady loved his family fiercely and made sure they knew that often. He was the most amazing son, brother, and friend imaginable, and he leaves a hole that cannot be filled. Other than his parents, Brady is survived by his brother Avery (JoAnna) of Nashville; his sister Callie of Jackson; grandparents Benny and Brylene Teague of Ramer, Tennessee; aunts, Melody Scott, Ginger Young, Denice Barfield, and Delise Teague; cousins, Seth Scott, Lucy Young, Hannah Sims, Jordan Gillentine, Jacob Prather, and MaryBeth Prather; and close family friend, Karen McWherter. He is predeceased by his grandparents, Bobby Tucker of Dallas, Texas and Pauline Tucker of Savannah, Tennessee; and aunt, Emily Crabb. SERVICES: A funeral service will be Sunday, June 14, 2020 at 3pm at West Jackson Baptist Church with Rev. Andy Neely officiating. Visitation will be from 1pm until service time. A private committal will be held on Monday. Pallbearers are Jordan Gillentine, Josh Goldstein, Edward Hockaday, Todd Mulligan, Jonathan Pesce, Jacob Prather, Patrick Rosenthal, and Seth Scott. In lieu of flowers, memorials can be directed to Cumberland Heights, P. O. Box 90727, Nashville, Tennessee, 37209. Arrington Funeral Directors, 148 W. University Parkway, Jackson, TN 38305. 731.668.1111. www.arringtonfunerlgroup.com. Facebook/arringtonfuneraldirectors

On Thursday, June 11, 2020, Brady Adam Teague passed from his earthly home to his eternity in heaven at the age of 26. He was born on December 23, 1993 in Jackson, Tennessee, the son of Bart and Audra Teague. Brady had one of the biggest hearts... View Obituary & Service Information

The family of Brady Adam Teague created this Life Tributes page to make it easy to share your memories.