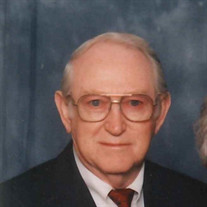 Blake Jolley, Jr. passed away on June 10, 2016 at the age of 81. Funeral services for Blake will be held on Tuesday, June 14, 2016, at 11:00 am at Malesus Baptist Church with visitation beginning at 9:00 am with Rev. Mark Cagle and Rev. Robert McBroom officiating. Burial will follow at Ebenezer Cemetery. Blake attended Medina High School where he was a star basketball player. His love of sports continued throughout his life. He helped organize the South Madison County ladies’ softball teams and coached the Malesus ladies’ softball team for several years. He participated in the Senior Men’s softball and basketball league. Blake was an avid bass fisherman and enjoyed spending time with his family and friends camping. He served in the Army and was a retired employee of Dal-Tile Corporation. He was preceded in death by his parents, Blake Jolley, Sr. and Edith Mills Jolley of Spring Creek. He was also preceded in death by his sisters, Pauline Cotton and Novella (Peggy) Smith. Blake is survived by his devoted wife Dale Longmire Jolley of Jackson; his son, David Jolley and wife Jane and his daughter, Kathy (Jolley) McBroom and husband Robert. Blake had four grandchildren: Logan Jolley, Clay Jolley, Rachel McBroom and Hannah McBroom. Blake adored his grandchildren, and they adored him. He is also survived by two brothers, James Earl Jolley of Spring Creek and Raymond Jolley and his wife Ann of Walls, MS and several nieces and nephews. He was a faithful member of Malesus Baptist Church. He had a true servants’ heart and until his illness, was actively involved in his church. He served as a deacon, taught a men’s Sunday School class, served as Sunday School Director and as Vice Chairman of the deacons. He also served on several Pastor Search Committees. Blake loved his church family, and they loved him. Pallbearers will be Clay Jolley, Bo Deaton, Jimmy Arnold, Gerald Longmire, Keith Turner and Jim Wilson. Memorial may be directed to the Malesus Baptist Church Building Fund, 480 Old Malesus Road, Jackson, TN 38301. Arrington Funeral Directors, 148 W. University Parkway, Jackson, TN 668-1111 www.arringtonfuneralgroup.com

The family of Blake Jolley, Jr. created this Life Tributes page to make it easy to share your memories.