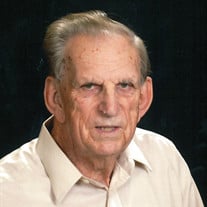 Billy White Rauchle, age 88, died peacefully in his sleep on March 24, 2019. He was born in Gibson County, TN on August 5, 1930. Billy as known as “the fence man” by all his friends. He was a salesman for Sears Roebuck and Company for 28 years, and loved his job as an outside salesman. After his retirement from Sears, he worked for Quality Fence Company. Billy grew the best tomatoes and vegetables in his backyard and loved sharing his produce with everyone. His other hobbies included drinking coffee with his buddies at Burger King and watching every ballgame, singing event or other activities of his children and grandchildren. Billy was a member of the Royal Order of the Elk, a member of the Trenton National Guard, and since 1971, a member of the Civitan Club, where he served as President in 1972 and 1995. He received the Civitan of the Year Award in 2017. The last two years of his life were spent next to Geneva, his wife of 66 years. Billy was a dedicated caregiver and a loving husband until the end. He was a proud graduate of Peabody High School and attended Lambuth College. He was a lifelong member of Whitehall Baptist Church, Trenton TN, and spent his last years of worship at Northside United Methodist Church as a proud member of the Pacers Sunday School Class. Billy was predeceased by his mother and step-father Floyd and Clara French, and his father and stepmother Willie and Rachel Rauchle. He is survived by his wife Geneva Burns Rauchle; daughters Gay Fowler and husband Ronnie and Christy Little and husband Steve; grand-children Chris Fowler and wife Katherine, Clay Fowler and wife Shelby, and Clare Little; great grand-children Liza, Kate and William Fowler; his half-sister, Anne Rauchle White; and a very special cousin, Julian H. Boyce. SERVICES: Funeral services will be held Thursday, March 28, 2019 at 2:00PM at Northside United Methodist Church, with Dr. Don Thrasher officiating. The family will be receiving friends from 11:00AM until service time at 2:00PM at the church. Burial will follow at Ridgecrest Cemetery. In lieu of flowers, it was his expressed wish for donations be made to the Jackson-Madison County Humane Society, 23 Pinnacle Drive, Jackson, TN 38301, Northside United Methodist Church, 2571 N. Highland Ave. Jackson, TN 38305, or the charity of the donor’s choice. Arrington Funeral Directors, 148 W. University Parkway, Jackson, TN 38305.631.668.1111.www.arringtonfuneralgroup.com

The family of Billy White Rauchle created this Life Tributes page to make it easy to share your memories.

Billy White Rauchle, age 88, died peacefully in his sleep on...