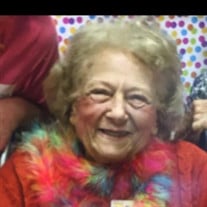 Betty York Whitaker Vance, age 87, passed away Thursday, March 26 at Jackson-Madison County General Hospital in Jackson, TN after a long illness with cancer. She was the widow of the late Vernon Leon (Punk) Whitaker and the late Shelton Brooks Vance. She was born November 14, 1932 in Tallahatchie County, MS to the late William Elisha (Bill) York and the late Inez Barnes York. She was also preceded in death by her brother, William (Bill) York, Jr. of Holly Springs, MS. Betty grew up in Charleston, MS and loved being a majorette in the high school band. She graduated from Charleston High School and after graduation attended Delta State University in Cleveland, MS. During this time, she met and married Punk Whitaker and moved to Batesville, MS. They had 4 children together. After his death in 1959, she went back to school and got her BAE from the University of Mississippi and taught school at Batesville Elementary School for several years. In 1968, she married Shelton Vance and began doing volunteer work in the community. She taught Sunday School and helped with many social and civic organizations. She was very active with the Daughters of the American Revolution (DAR) and was able to attend her last meeting just a few months ago where she was recognized as a 50-year member. Betty was a member of North Jackson Baptist Church in Jackson, TN. She loved going to church, being with people, dressing up and wear her cute hats. She loved to talk and visit with everyone around her. She was a constant letter writer and found joy in writing letters and sending cards. Her faith, family and friends were very important to her. She was a true fighter and sick for a very long time but fought hard to live. She gave it her all and kept going until the Lord called her home. Betty will be most remembered by her 3 sons, Leon Whitaker of Jackson, TN, David Whitaker (Carol) of Sugar Tree, TN, and William Whitaker of Van Nuys, CA; her daughter, Betty Jeanne (BJ) Kinard (Kenny) of Jackson, TN; one brother, Robert (Bobby) York of Batesville, MS; two sister in laws, Lockie York of Holly Springs, MS and June Vance of Memphis, TN; 3 grandchildren, Alexis Whitaker of Van Nuys, CA, Shaun West (Ali) of Olive Branch, MS, and Cody Kinard (Bonnie) of Chattanooga, TN; 3 great grandchildren, Amiyah Love and Kayden Beutel of Sugar Tree, TN, and Levi West of Olive Branch, MS, plus a host of nieces and nephews. The family will not have a service until a later date because of the Coronavirus. We ask that in lieu of flowers please send memorials to North Jackson Baptist Church, 3768 Highway 45 Bypass, Jackson, TN, 38305 or the American Cancer Society. Arrington Funeral Directors, 148 W. University parkway, Jackson, TN 38305.731.668.1111 www.arringtonfuneralgroup.com.Facebook/ArringtonFuneralDirectors.

Betty York Whitaker Vance, age 87, passed away Thursday, March 26 at Jackson-Madison County General Hospital in Jackson, TN after a long illness with cancer. She was the widow of the late Vernon Leon (Punk) Whitaker and the late Shelton Brooks... View Obituary & Service Information

The family of Betty Claire Vance created this Life Tributes page to make it easy to share your memories.