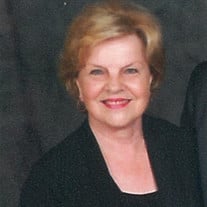 Betty Rowell, age 77, died on Saturday, June 22, 2019 at her Jackson residence. A native of Jackson, TN, Betty was born on August 24, 1941, the daughter of Arthur and Erfie Lula Surles Childress. She graduated from Northside High School in 1959 and attended McCollum and Ross Beauty School. She began her career as a beautician with Beautyland Salon becoming one of the owners and later relocating to the George-Anna Beauty Salon working with her sister and later purchasing the salon. After her career as a beautician, Betty was the secretary for Ray Blanton’s field office for four years, she was employed by Coca-Cola, (where she was named employee of the year) and worked with TDOT. She completed her career with Madison County in the Register of Deeds office and finished in the Trustee’s office. She was a member of Poplar Heights Baptist Church. She enjoyed cooking, gardening and flowers. Her family was her passion and she took pride in caring and being with them. She is survived by her husband, William N. “Bill” Rowell of Jackson, TN; two sons, Russell Rowell of Jackson and Billy Rowell (Sharon) of Milan, TN; a sister-in-law, Katie Byars (Terry) of Yuma, TN; two brothers, Thomas Earl Childress (Janet) of San Antonio, TX and Ray Childress (Martha Nell) of Pinson, TN; a sister, Mildred Roe (J.C.) of Jackson, TN; four grandchildren, B.J. Rowell, Bryan Rowell, Morgan Rowell and Nathan Rowell and one great-grandchild, Ashlynn Rowell. SERVICES: A funeral service will be held at 2:00 PM Wednesday, June 26, 2019 in the chapel of Arrington Funeral Directors, with Rev. Tom Toner officiating. Burial will follow in Ridgecrest Cemetery. The family will be receiving friends on Tuesday, June 25, 2019 from 4:00 PM until 7:00 PM. The family is requesting that memorials be directed to the Vanderbilt Ingram Cancer Center, 1301 Medical Center Drive # 1710, Nashville, TN 37232. A complete notice is available on Arrington Funeral Directors’ Facebook page or www.arringtonfuneralgroup.com 731.668.1111

Betty Rowell, age 77, died on Saturday, June 22, 2019 at her Jackson residence. A native of Jackson, TN, Betty was born on August 24, 1941, the daughter of Arthur and Erfie Lula Surles Childress. She graduated from Northside High School in... View Obituary & Service Information

The family of Betty Jean Rowell created this Life Tributes page to make it easy to share your memories.