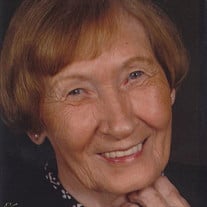 Betty M. Kendall, age 93, died Saturday, July 24, 2021, at Jackson-Madison County General Hospital. She was born in Troy, TN on February 25, 1928, the daughter of the late Jack and Lois Kinsey Simpson. Betty was married to the late Gibson Kendall for sixty-five years at his death. She was retired from Sears, where she worked in appliance sales for over thirty years until her retirement. She was an active member of Browns United Methodist Church for many years serving in various capacities. She is survived by her two sons, Mike Kendall and wife Beverly of Humboldt, TN and Raymond Kendall of Beech Grove, IN; sister, Agnes Baker of Ridgeland, MS; two grandchildren, Mitchell Kendall of Lavergne, TN and Nathaniel Kendall of Portland, TN; along with four great-grandchildren and three great-great grandchildren. Other than her husband, she was preceded in death by a sister, Adelle Hill. SERVICES: A memorial service will be held at 1:00 PM Thursday, July 29, 2021, at Browns United Methodist Church, with Rev. Tom Spellings officiating. A committal service will follow in Browns Cemetery. The family will be receiving friends from 11:00 AM until 1:00 PM at the church. The family is requesting that memorial contributions be directed to Browns UMC c/o Kendall-Spain Sunday School Class, 181 McLeary Road, Jackson, TN 38305. Arrington Funeral Directors 148 W. University Parkway Jackson, TN 38305 731.668.1111 www.arringtonfuneralgroup.com Arrington/Facebook

The family of Betty M. Kendall created this Life Tributes page to make it easy to share your memories.