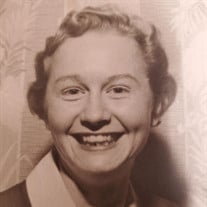 Betty Joe Moore Gass was born in Alamo, Tennessee on February 27, 1933 and died peacefully at her residence in Jackson on July 28, 2021. She was raised in Gibson County and graduated from Milan High School, after which she attended Belmont College and Union University where she was a member of the Union University chapter of the Chi Omega Sorority. She met her husband, James Gass, at Union. They were married on December 28, 1954, and their second child, Cherie, was born about an hour before graduation, arriving several years ahead of schedule. Upon graduation her husband was commissioned in the Navy. Over the next thirty years she lived in Newport, R.I, Washington D.C., Norfolk, VA, Key West, FL, Nashville, TN, Memphis, TN, Guantanamo Bay, Cuba, and Subic Bay, Republic of the Philippines, before returning to Jackson upon James’ retirement, where she was his legal secretary for ten years, following which, they traveled and enjoyed several cruises. During the first eleven years of the marriage, Betty was employed as a bookkeeper or in accounting. She was always a devoted mother and dedicated homemaker, loving her children more than anything in the world. Betty was a wonderful Navy wife, looking forward to each move as an adventure. With her winning personality, she brought joy and laughter to all who knew her, and quickly made new friends at each new duty station. Betty is survived by James, her husband of 67 years; her four children, David, Cherie, Bob, and Patrick; three grandchildren, Jim, John, and Charlie; one great grandchild, Erin; sister, Phyllis Riley of Louisville, KY; and several nieces and nephews, including William and Leonard Eddings who were raised with her. Memorial Contributions and or in lieu of flowers, donations can be made to the American Cancer Society, 2135 Highway 45 By-Pass, Jackson, TN 38305. To make a memorial donation online go to: www.joingenerous.com/memorial-betty-joe-gass SERVICES: The family will be receiving friends from 1:00 P.M. to 2:00 P.M. on Sunday, August 1, 2021 with a Celebration of Life Service in the Chapel of Arrington Funeral Directors with her son, Rev. David Gass officiating. Arrington Funeral Directors, 148 W. University Parkway, 731-668-1111 https://www.arringtonfuneralgroup.com/live-webcasting/

Betty Joe Moore Gass was born in Alamo, Tennessee on February 27, 1933 and died peacefully at her residence in Jackson on July 28, 2021. She was raised in Gibson County and graduated from Milan High School, after which she attended Belmont... View Obituary & Service Information

The family of Betty Joe Gass created this Life Tributes page to make it easy to share your memories.