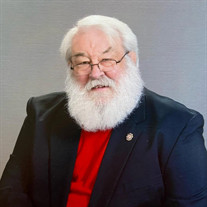 Barry Russell Geise, 80, died Sunday, December 20, 2020 at Jackson Madison County General Hospital. Husband of Nancy Guyton Geise, Barry was born January 29, 1940, and raised in Grand Mound, IA, as the son of Lois and Bert, Jr, older brother of Lynn, and cousin and nephew to the Geise and Barber families. He is father of Lucian Downs Geise (Amy) of Nashville, TN, and Amy Blair Merkle (John) of Edmond, OK; husband and widower of Sarah Choate Geise, stepfather of Joe Guyton, James Seth (Lorella) and Vestie Mae Jennings. He treasured his grandchildren Boden Zane, Carter Andrew, Maxwell Vaughn, Benjamin Maddux, Molly Elizabeth, Isabella Claire, James Samuel and Jackson Cole; and he enjoyed being Uncle Barry to the Dawn Barr and Jay Hawthorne families. Barry was an Eagle Scout and Senior Class President of the Grand Mound Class of 1958. He earned a BA in Art and was President of Tau Kappa Epsilon fraternity at Northern Iowa University. He graduated from Navy Officer Candidate School in Norfolk, VA, and served the country during the Vietnam War in many capacities, beginning as a Navigator in Photo Reconnaissance on Guam. He earned his wings at the Naval Air Station in Pensacola, FL, and became an HC 4 helicopter pilot attached to the Combat Support Squadron in Lakehurst, NJ. He led separate detachments to Antarctica for Operation Deep Freeze and Gaeta, Italy, aboard the USS Little Rock. With the prospects of a family, Barry retired from active duty and continued in the Navy Reserves until he retired with the rank of Commander. With his undergraduate art degree, he then earned an MA and MFA from Northern Illinois University as a Master Potter. He moved to Mountain View, AR, and established Stone County Pottery. When he was offered a position as Executive Director of the new Joe L. Evins Appalachian Center for Craft in Middle Tennessee, the family moved to Cookeville, TN. Following that position, he worked as an Exhibit Designer for Tennessee State Parks where he became an amateur expert in Tennessee history. Outside of work, he participated in community activities including barbershop singing, Alcoholics Anonymous and Boy Scouts of America. In Scouting, he served as the Scoutmaster/Course Director of Wood Badge MT-31 and earned the BSA Long Rifle Award and Silver Beaver Award. After retiring from the State of Tennessee, Barry moved back to Iowa to take care of his 85-year old mother who surprised everyone by living until age 95. While there, he taught art at Blackhawk Community College, worked at the Putnam Museum, in Davenport, IA, and returned to making pottery with the local pottery guild. He also sponsored many in the recovering community. In 2006, he relocated to Jackson and became an active member of Forest Heights United Methodist Church, sang with the Casey Jones Barbershop Chorus, met weekly with the Donut Coffee Klatch, continued to participate in AA, and volunteered at Jackson Madison County General Hospital. Barry was also a bluegrass music fan, bread baker, and he loved dogs, cookbooks, hats and thrift stores. SERVICES: The family appreciates the generous support from family and friends, but considering the COVID-19 pandemic, they have decided it is best to have a private ceremony. A private memorial service will be held Tuesday, December 29, 2020 at 1:00PM in the chapel of Arrington Funeral Directors. The service will be live streamed and available for later viewing On Demand. Those serving as Honorary Pallbearers will be Boden Merkle, Carter Geise, Max Merkle, Ben Geise, Molly Geise, Isabella Merkle, Ron Guyton and Members of the Donut Coffee Klatch. The family has requested that in lieu of flowers, memorial contributions be directed to St. Jude’s Children’s Hospital (www.stjude.org/donate) , RIFA Jackson (www.rifajackson.org) or Area Relief Ministries Room in the Inn (www.areareliefministries.org). Arrington Funeral Directors, 148 W. University Parkway, Jackson, TN 38305 731.668.1111 www.arringtonfuneralgroup.com

The family of Barry Russell Geise created this Life Tributes page to make it easy to share your memories.